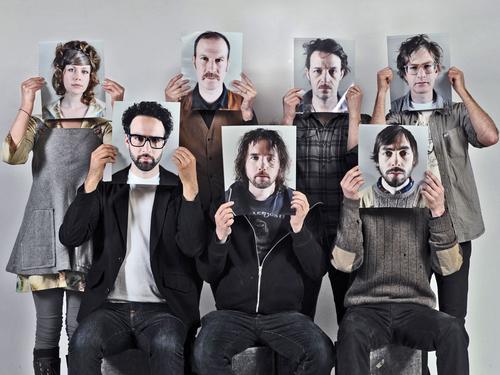 Broken Social Scene is the musical collective of all musical collectives, the amorphous supergroup that refuses to call itself a supergroup. Since forming in 1999, they’ve been joined by various figures in the indie community, from Leslie Feist to Emily Haines to all four members of Stars. However, earlier in the month Kevin Drew spoke to Pitchfork about the band’s indefinite hiatus; the group is splintering, at least for the foreseeable future, and working on other projects.

But wait! Dry your tears, San Francisco BSS fans. The group has planned a last hurrah of sorts: their last North American show will take place at none other than the Fillmore, this Saturday. The gig will have a “mellow session,” a “loud session,” and will feature Stars‘ Amy Millan and Evan Cranley. Isaac Brock of Modest Mouse will also appear for a few tunes.

For you really rabid fans, make a day of it: BSS be playing Hardly Strictly Bluegrass that afternoon. But don’t miss the show Saturday evening, because this’ll be a gig for the books.