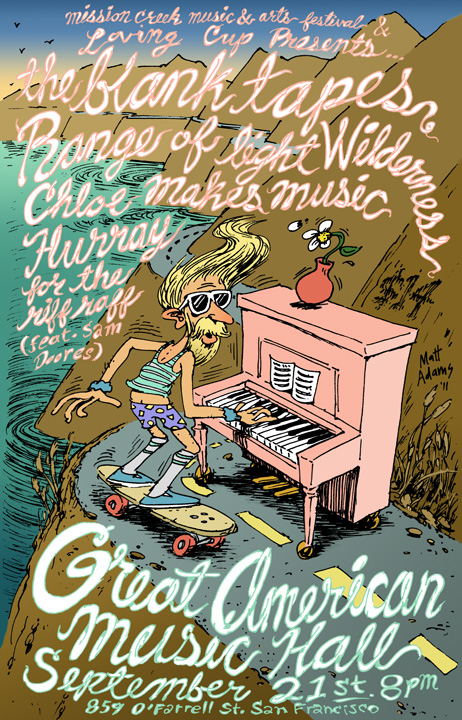 Get psyched for an epic folk-rock showcase. On September 21st four bands will folk out the Great American Music Hall in San Francisco. Loving Cup & Mission Creek Music & Arts Festival Present The Blank Tapes, Chloe Makes Music, The Range of Light Wilderness, and Hurray for the Riff Raff. Mission Creek is a music and arts festival founded by the Bay Area musician Jeff Ray. Now its 15th year, the festival celebrates and supports artists and musicians who pursue their art while actively rejecting the influence of mainstream commercialism.

The banjo-driven folk ramblers Hurray for the Riff Raff will open the show Wednesday night. The core duo of Alynda Lee Segarra & Yosi Perlstein is joined for this tour by Dan Cutler & Sam Doores of Tumbleweeds. The most striking part of each song is the voice of singer/songwriter Alynda Lee Segarra; at once strong, tender, sweet, and forcefully mature.

Although The Range of Light Wilderness has very little virtual presence on the Internet, this bass heavy folk band has plenty to offer in their music alone. The group’s Bandcamp site is the only informative cyber vantage point from which to asses their virtues. Many of their songs are punctuated by vocal harmonies reminiscent of The Beatle’s “Day Tripper” and “Because.” The Range of Light Wilderness is psychedelic acoustic folk rock with great potential.

Another homegrown act, indie-country-soul-folkers, The Blank Tapes, will be headlining the night. These cats get an automatic win for incorporating vocal harmonies and a horn section into their very own country-folk blend. It’s like The Grateful Dead’s Working Man’s Dead meets The Velvet Teen. Wicked!

For more info check out the facebook event HERE