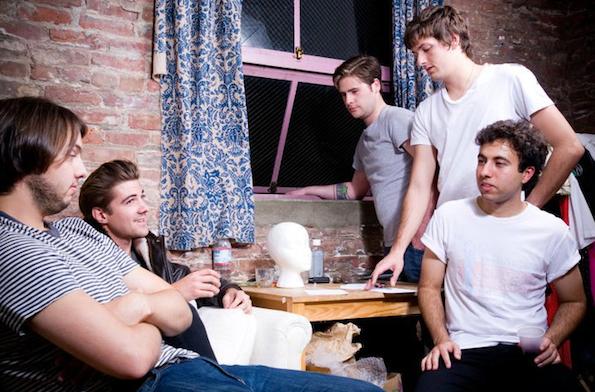 Expecting a younger crowd since the door guy asked me what grade I was in, I walked into the near packed Rickshaw Stop Friday night just as The Soft White Sixties had begun to play underneath a shroud of moody blue lighting. Celebrating the release of their self titled debut EP (the band appropriately shouted out to their producer Joe Finocchio), there wasn’t a dull moment within their set. The Sixties proceeded to play what would be a perfect mix of on the side of a railroad track blues and early seventies psych-meets-arena-rock only suitable for a dirty tour bus. The mostly older, slightly chatty male crowd (where were all these supposed high schoolers!) watched as the sheepish mop tops shared microphones while singing hooks. Driving guitars, harmonicas, and drum solos that lasted a little bit longer than they should have, the band won over the moderately amused and turned them into full-fledged fist pumpers by the time they played “It’s Too Late.” Front man Octavio Genera is an outstanding performer, writhing around stage chest hair exposed and shaking a tambourine, he has a voice that juxtaposes smooth soul and raspy rock ‘n’ roll. “We know there’s a lot of shit you could be doing in this city, thank you for being here tonight,” was the sincere appreciation expressed before finishing their last song, fostering a short lived “one more song” chant. The Soft White Sixties are your dad’s favorite band that he doesn’t know exists.

To my surprise, the crowd seemingly dispersed and had gone from near packed to hardly full by the time A B & The Sea appeared on stage. Polished in fitted blazers and collared shirts, the local heart throbs have garnered an extremely loyal fan base over recent years; their retro-beachy vibe, A B and the Sea could easily be the band playing an under the sea themed prom for the class of 1964. All the brunettes pouted when “Yellow Haired Girl” was dedicated to “all the blondies out there” by the always charming, George Clooney clone Koley O’Brien, whom I’ve never seen play a show without a gaggle of young girls ogling at every hip swerve and toothy smile beneath him. While the attention is almost always focused on Koley, whose voice cracked quite a few times throughout the night (side effect from recent extensive touring?) the true driving force of A B & the Sea is drummer Troy Lawton; his face painted with extreme concentration, Troy’s drums keep the band from being too cheesy pop. Those missing in action high schoolers were found in front of me, a braces clad fan turned abruptly turned to her friends exclaiming “IT’S 12:15! WE NEED TO LEAVE!” before the group reluctantly left the half finished set right before The She’s joined the band on stage. The earlier opening band that has been doing incredibly well for themselves (for ANY band, let alone a band who still has homework on school nights) shared in harmonizing for two songs, including the overwhelmingly heart wrenching “In and Out,” that dually accentuates the talents of guitarist Joe Spargur and keyboardist David Hunt. The Soft White Sixties replaced The She’s on stage to aid in a cover of Tom Petty’s “American Girl” which was thoroughly enjoyed by the dorky couple in front â€“ complete with choreographed dancing. Closing their set with “In the Sunshine” their newest song takes on a slightly more mature sound while keeping consistent with the fun loving vibe we’ve all grown accustom to, proving that A B & the Sea are far more than a short lived novelty and will only continue to progress and prosper.