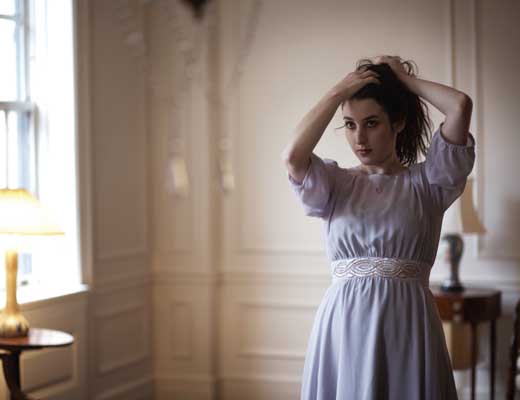 Marissa Nadler’s show at The Swedish American Hall came to me when I most needed it. She sings melodies for the weary, for the lovesick and lonely, but I think mainly she sings for those aware of an ancient magic still simmering underneath our 2.0 virtual existence. You know, somewhere underneath those pop-up ads and Facebook notifications. When I was losing faith in the art of connecting with a certain someone, she sang as if human connections were the hardest to pursue, but also the most worthwhile. How else could anyone sound so endearingly melancholy for an entire set?

Cue to a few nights ago, when my friend and I rushed into the venue only to slow our steps in respect. The Swedish American Hall works in tandem with (and in the same building as) the trendy Café du Nord. It lent a reverential air, with its dark wood molding, white walls, sparse decorations, and fold-out chairs for all. Marissa was already on-stage, surrounded by 3 different acoustic guitars and wearing only a simple white dress. Her eyes were sad and her movements minimal, but the entire audience was entranced. For a girl-woman who is obviously shy and hesitant on stage, she hit a sweet-spot with the crowd from the start.

Dream-folk at its best, her voice has been described by Pitchfork as one “you would follow straight into Hades.” Yet I saw her as a Rapunzel, (if Rapunzel had vocal chords as her talent as opposed to just really, really long hair) a fairy tale siren shut-out from normal society and singing for someone to crawl through the window and be a shut- in with her. Marissa played through several of the songs off of her new eponymous
album, including “Mr. John Lee Revisited”, “ In Your Lair, Bear,” and “Daisy, Where Did You Go?”

In between songs her banter seemed genuine and hesitant. “I make jokes when I’m nervous.” And the crowd laughed along with her. She also mentioned that “a lot of these songs are about being dominated by manipulative men… [pause] This song is about the morning after being dominated by a manipulative man.” That song turned out to be “Hyacinth Girl.”

General consensus? Marissa Nadler is an old soul sweetheart with an overwhelming amount of melancholy charm. Check out her video “Mexican Summer” if you don’t believe me.