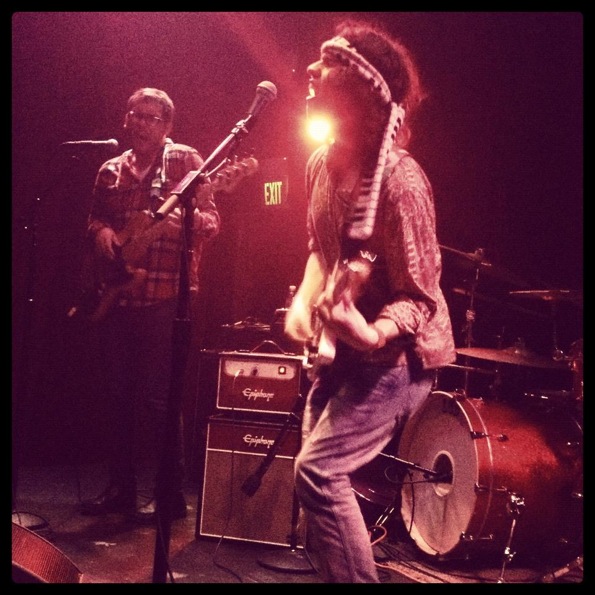 Lead singer, Scott Huerta, of French Cassettes is silly… and maybe a little buzzed? Or maybe he’s just way in to the jam session that he and his three band mates are creating on stage at the Rickshaw Stop. His eyes are closed and he has a tie around his head, he’s wearing a peach or beige paisley long sleeve shirt and he’s wriggling around the stage like a ’90s garage band all the way down to his original converse.

Opening with a newer song, “Bee’s Knee,” the band crafted a sound that was awfully easy to get lost in with fast-tempo beats, bouncy guitar riffs, and lots of crooning ooohs and ahhhs. Although at times the vocals were lacking in sharpness, it was obvious that the skills were there. I believe these young souls are like wine — their sound will get finer with age; their well-structured songs are a testament to this.

The group held great chemistry on stage and their performance seemed to be a spiritual affair for the four of them. Looking up at the singer, it was all too easy to wonder if his shirt, long brown-blonde curls, and spacey dancing was a tribute to the late Jim Morrison. He beckoned the crowd to come closer by sarcastically saying “I think it’s really wonderful that you’re here in front of us in a U shape. Thank you.”

The mob picked up what he was laying down and scooted closer to the stage where they proceeded to raise the bar for what I call “moving.” Where I once would say head-bobbing and foot-tapping, I will now include hip movements and general hand/arm flailing. During one of the last songs, the drummer subtly threw his drumstick in the air and almost didn’t catch it. That’s kind of how French Cassettes are, almost a little off-kilter. And in their own little-boy-rocking-out-with-an-air-guitar style, they deliver a pretty solid performance which will be making its way all through California, Arizona, and even Texas in the next month. Go see these guys, they will take your ears for a swim.