SEATTLE SCENE: From Rock To Folk 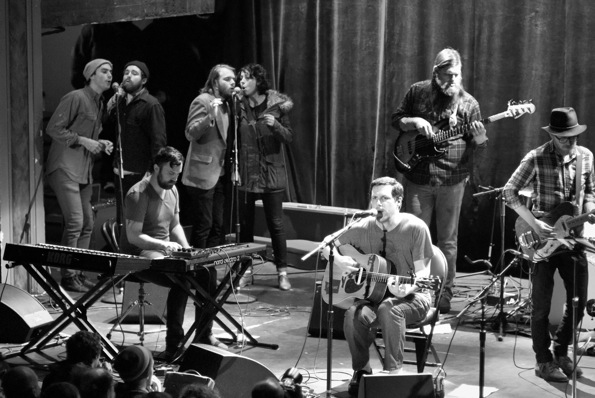 The godfather of Seattle folk, Damien Jurado, is on stage strumming a guitar.

His “choir,” as he calls them when he beckons them onstage, consists of members of The Head and The Heart, Deep Sea Diver, Pickwick, and the opener for the night — singer/songwriter Bryan John Appleby.

Jurado sings of their city, “Leave me Manhattan, I want the evergreens. Write me a song I can sing in my sleep.” His ensemble oohs and ahs behind him.

This portion of the Seattle music scene is intimately intertwined; Appleby and Jurado share band members Kyle Zantos and Jesse Hulbert; Kendra Cox of the band Lemolo watches from behind stage; and The Head and The Heart have taken two out of three of these artists on tour.

Sold-out shows at The Neptune are just another place where they all hang out.

Beginning with The Sonics and Jimi Hendrix in the sixties, the debut of Bumbershoot music festival in 1971, and the appearance of Nirvana in 1991, Seattle was transformed from an industrial seaport to a city rich with musical aspiration. The scene has since evolved into a smaller and more intimate hub, influenced by the softer sounds of folk.

There are 40 record labels recognized in the Seattle Music Directory and several venues such as The Crocodile, Neumos, The Tractor Tavern, and the newly renovated Neptune theater, serve as a playground for local musicians.

Seattle continues to churn out kick-ass musical artists, many of whom deserve recognition from outside the Pacific Northwest circle.

Check back next Friday for an exclusive Owl Mag interview with The Head and The Heart, and keep coming back to learn all about the bands you should know about, straight from the Seattle artists themselves.