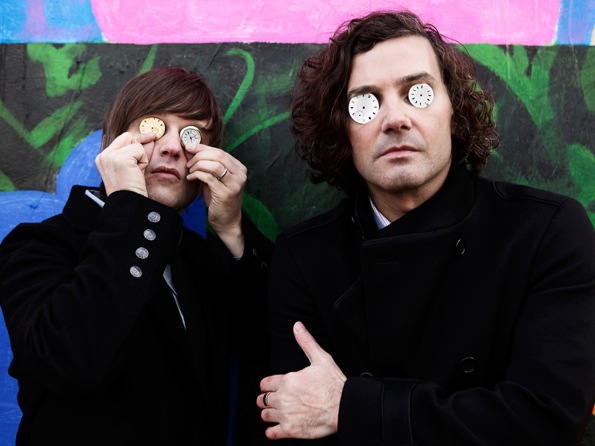 It’s Not How You Start, It’s How You Finish is the title of their recent US album releaseâ€¦and I think they mean it. In the musical landscape, the band The Hours fills a fresh space yet take on a familiar scenario: various band fragments and experiences melding into a new entity with new songs to sing and stories to tell. Antony Genn and Martin Slatttery are two music veterans fleshing out this new project, less a labor but certainly a love. Los Angeles’ Bootleg Theater welcomed the band for what was only their second proper US show and Genn was a fountain of charm and insight into the man behind the music.

The Owl Mag: When did this tour start?

Antony: About â€“ it just came up like about ten days ago. But we hadn’t stopped really. It’s been pretty full on. We’ve worked really hard. Of course, there’s only three of us. So with all our crew it isn’t much really, so we’re setting up all the gear and everything. And it’s back to basics.

The Owl Mag: It’s like you’re new all over again.

Antony: It’s really back to basics for us which is a pain in the ass. And it’s also the most rewarding thing in the world because it’s like the difference between eating a microwave meal or going to the shop and getting the vegetables and the meat and cooking it all yourself. And takes a little longer and it takes a lot more effort, but in the end it tastes a whole better and is a lot better for you.

The Owl Mag: You’ve got history, got bands behind you. You’ve got musical influences behind you. So now you’ve got a thing called The Hours. What’s the sum total of The Hours? I mean how do you reconcile working with Joe Strummer and all the other music that you’ve done; how does it combine into what you’re doing now?

Antony: Well personally I think it really, really combines in it. I can hear all the influences. I can hear Beethoven and de Buci. I can hear Mr. Fingers and Chicago and Detroit House. I can hear Motown. I can hear, I don’t know, Radiohead. And I can hear Happy Mondays and Stone Roses.

The Owl Mag: It’s funny you say Motown because that song “Soul Music,” when it first started, I was hearing Marvin Gaye.

Antony: Definitely. I mean “What’s Going On” is one of the best records ever made.

The Owl Mag: I was hearing “What’s Going On.”

Antony: It’s one of the greatest records ever made. In a way because it’s the kind of song â€“ lyrically, it’s a kind of song where â€“ it’s our kind of Marvin Gaye moment in a way ’cause “What’s Going On” is a song â€“ it’s a plea to the world. The whole album is like what’s going on here? And in a way that’s what sold me to sell music for troubled souls, gospel for the godless.

Antony: And that’s what we need. All the lyrics are very straightforward. When you write lyrics like “Brothers and sisters,..” at the beginning you think can I get away with that? You say, “Who gives a fuck? Just do it. I mean it.” I don’t mind putting my head on the chopping block. Someone wants to chop it off, fair enough. But I mean it. Chasing money has killed us. We live in a time where it’s about time â€“ I don’t think enough people, particularly any kind of hooky pop music, are singing the kind of lyrics that are a bit more to chew on. So anyways, what it is I’m known for is baring my soul. And some people don’t like that and some people do. But I don’t care.

Antony: Absolutely. I’m trying to write lyrics like as if I’m just having a conversation with someone like in a bar or a cafÃ© or in a park or in the street or in the supermarket. It’s, to me â€“ I mean some of the great lyricists I really love write things very simply. I’m very fond of Hal David’s lyrics who makes an everyday sentence sound like a magic statement. Like I just don’t know what do with myself simply becomes [singing] I just don’t know what do with myself.

The Owl Mag: And it says so much.

Antony: “If you seen me walking down the street and I start to cry each time we meet, walk on by. It’s nothing.” Â You cannot fail but to understand what he’s saying.

Antony: And the thing is communication, to me, is about meeting people wherever they are. It’s not about standing on the mountains saying if you can climb this mountain then I can communicate with you. I don’t â€“ I hate intellectual mountains. It’s just loads of people reading the same books. It’s bullshit. Why be like that? Someone once said that I wrote lyrics like a 15-year-old. I was like look at that. Make it 12.

Antony: It’s straightforward. I mean I’m not saying that all- hey, I’m not studious and all my lyrics are great. But I try and make them mean something. And like I’m a documentary lyricist that’s generally about things I see or directly about my life. So there’s not much mystery. Some people like mystery. If you like mystery, then we’re the wrong band for you. There’s not mystery with our band.

The Owl Mag: That’s not so bad.

Antony: I’m a kind of give me a machete, I’ll carve myself open and just throw my insides all over the floor.

The Owl Mag: Have you always been that way?

Antony: Well, I’ve always written like that. Really this is the first time, The Hours is the first time I’ve written lyrics in the song. I didn’t sing till I was in my mid 30s. I never sang a note in me life. I came late to know all this stuff. I was in a band with Jarvis Cocker when I was a kid. I was much younger than them because I lived with my brother from being 14-years-old. And he was friends with Jarvis. And then I was in a band with Joe Strummer who’s inarguably one of the greatest front men.

The Owl Mag: So what made you step out and become a front man?

And it made me realize that what I’ve been doing wasn’t real life. It wasn’t even a life. I was clean by that time. I was just clean. I was a few months clean when I found out my dad was ill. And it was the first time in my life I was like are you gonna be boy or are you gonna be man? Â Are you gonna stand up to the plate because in my family I’m the youngest but I’m the oldest, if you know what I mean. And I had to step up.

The Owl Mag: Is anyone else in your family a musician?

Antony: My dad was a butcher, but he was also a drummer. And my brother’s a musician. He’s got a band in Sheffield where I’m from. He’s always gonna play music.

Antony: That’s where I’m from. The north of England.

The Owl Mag: I’ve never been to England. Just side note, if I were to go to England for the first time, where should I go?

Antony: I wouldn’t go to Sheffield. Just go to London. Depends what you’re going for.

The Owl Mag: Music and food.

Antony: Music and food, London. Manchester is a pretty good place. Edinburgh’s a beautiful place. Glasgow’s a great music town. Seeing music in Glasgow is the best place in the world to play music. Best place I’ve ever played and I’ve played in quite a lot of places around the world. The Scottish, they are absolutely mad for it.

The Owl Mag: [Laughter] That’s charming. You’re a charming individual. I like thisâ€¦ this conversation.

Antony: What you see is what you got. I am what I am. [Laughter]