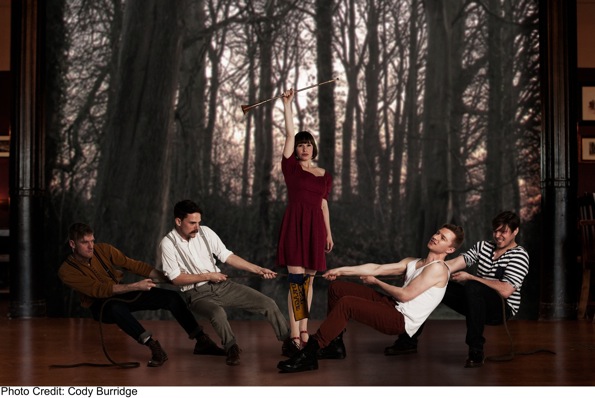 Skinny Lister, known as the hardest working indie folk band in England, has joined up with band Rusted Root for a tour across America. They’re known for their lively jigs and full sound. Recently, The Owl Mag got to sit down and chat with Lorna Thomas, the lead vocalist for the band. Lorna told us the scoop on their newest video, and about their first US tour. Here’s what she had to say:

The Owl Mag: You guys have been touring the US for a while now. How’s it been?

Lorna Thomas: It’s been amazing. We started out with SXSW in the beginning of March, then we played Chicago, Portland, Seattle, we’ve just been in LA for the weekend, which has been great as well. Very good. We’ve covered about 7,000 miles so far.

The Owl Mag: Wow, what’s been the most memorable show so far?

Lorna Thomas: The most memorable show we’ve played…for me, it’s probably not the same as everybody else. LA was pretty cool. The power cut out, that was very funny, and we just carried on playing.

The Owl Mag: That sounds awesome! We’ve been following your guys’ blog, and been seeing this rather large, moonshine-looking jug of alcohol in your pictures. It looks exciting! What’s that about?

Lorna Thomas: Well, our favorite drink is rum, and we think we should share it with the audience…we basically want the crowd to feel like part of the band. Rum makes for more fun generally.

The Owl Mag: You’re known for your lively folk ballads, but outside of the concert venues, what have you guys been listening to on the road while you’ve been traveling?

Lorna Thomas: The radio, a lot of county music, David Rehm, who toured in LA with us. He’s got this 22-minute rendition of an old song called “The Black Leg Miner,” that’s quite spectacular and a bit of Flogging Molly as well.

The Owl Mag: Quite the mix there. All the bases covered. Speaking of songs, you guys just released a great video for the song “Plough & Orion.” It’s one of the prettiest videos we’ve seen lately. Can you tell me a little about the story behind the video? What did you want to convey to your audience?

Lorna Thomas: Basically, whenever we make a video, we want to make it as real of an experience as possible, and “Plough and Orion” is an ode to love. There was a couple that got engaged at one of our gigs, and their favorite song was that one, so we decided to take them out for a weekend, and take them on a magical mystery tour, and throw a romantic dinner on the top of a hill on the heart of the English countryside. So yeah, we carried all that stuff up the hill, it was cold up there, we put a dinner on for them, and it was just to say thank you really for supporting us and being our friends. And they had a beautiful day, and when I was singing, I was shedding a tear because it was so obvious that they were so in love. And they’d never done something like that before. It was a special day.

The Owl Mag: It really shows in the video, it’s very poignant. And that song is going to be on your full-length album, right?

Lorna Thomas: Yeah, The Forge and The Flagon. It’s due in out in June in England and on iTunes. We’re talking about a US release after that.

The Owl Mag: So how do you feel about the record as a whole?

Lorna Thomas: Wow. We’re really relieved. We really wanted to make sure that we captured the live feel that in the album. So we played a lot of it out of the studio, in Wales, and we just stayed in a place together, until we got it all right. Even still, when I hear it, I still want to get up and dance.

The Owl Mag: We’re glad that we got to talk to you, because we have a question specifiacally for you. We read a review that called you the “energy liaison” of the band. I love that! How true is that statement?

The Owl Mag: We have one more question for you. How did you guys like SXSW?

Lorna Thomas: Oh my god, we loved it. I mean, it’s my first time in the US so we got into town in the middle of the night, and then straight to music. It’s incredible, I mean, wow. We did loads of gigs and yeah, I just think, if we can play there, we can play anywhere. We kept really busy and we made the most of the opportunities that we had there. We’re the hardest-working band in the UK. We never say no to anything. We just want to spread the music. Yeah, it’s amazing. I love America.

The Owl Mag: Well, hey, that does it for us at The Owl Mag. We know you guys have to go, thanks so much for your time. We look forward to hearing you guys live! Tell the rest of the band we really appreciate your time and music.

Lorna Thomas: Awww, thank you. We can’t wait to play for you!