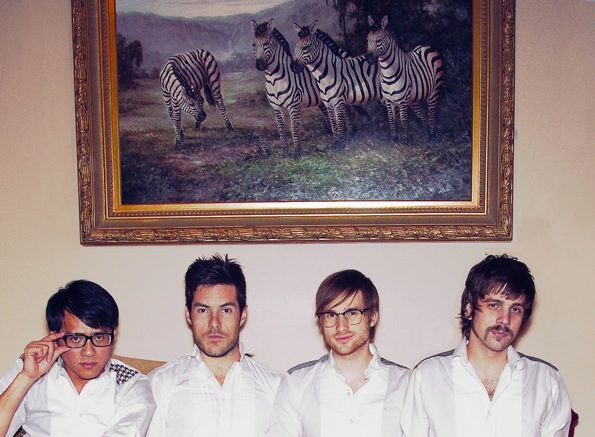 You live in Los Angeles, you’re in a rock band, and the end of the world is on the horizon, so what do you do? If you’re Prince then you party like it’s 1999. Apparently LA’s Saint Motel are good students of how to go out like you mean it because on Saturday, May 21st the show to end all shows happens on the sinful Sunset Strip at the famed Roxy Theater and I thank Saint Motel for granting us this, possibly their final interview ever. Judgment Day is upon us, good people. Great music? Check. Rapture Travel Kit? Check. Pearly Gates? Double check.

The Owl Mag: This is our pre-Judgment Day conversation. And one of the reasons I wanted to do this one was because you have this huge show coming up Saturday. What’s the theme? What’s the point?

A.J. Jackson: Well, we were playing a show out in Washington D.C. in December and outside the White House, we saw these people picketing and we thought it was probably about like ObamaCare or something. But it said, “Have you heard the good news?” I’m like, “Oh, oh, it’s a good picket.”

A.J. Jackson: “You’re all gonna die.”And we’re like, “Oh, what do they mean?” And then, it was another apocalypse. But this time, they said the Bible guarantees it.

A.J. Jackson: So, we thought that was pretty interesting. We went up and we talked to them for like an hour and they told us that it was the anniversary of the flood, Noah’s Ark, and that this time there’s so much evidence it was really happening that there’s no way we weren’t all gonna die. So, we thought that was pretty funny. And then, we played a show in January at the Rock & Roll Circus in New York and they were out there too.

A.J. Jackson: No, different people. Like, the thing is they have a huge campaign. Harold Camping Family Radio, Project Caravan. And they are really well organized and they’re everywhere. So, we started to think, wow, what are they gonna do on May 21st when the world ends? Like, maybe, we should throw a celebration in honor of it? And we decided to do that, kind of with their help, though they don’t fully know what’s going on, but they’re happy that we’re also pushing the message.

Aaron Sharp: Well, we help them too, ’cause we promote it.

The Owl Mag: And I’ve seen the videos and you’ve got â€“ you’re giving them equal â€“ ample time.

The Owl Mag: And it also goes along with the fact that you guys normally do thematic shows anyway.

A.J. Jackson: We do a lot of shows like, I think, cinematic would be better, ’cause the way I see it, like a theme show to me seems like a theme party, like a Bloods and Crips party. But a lot of our parties â€“

Aaron Sharp: Which are fun.

A.J. Jackson: â€“ which are fun, but a lot of our things aren’t really like centered around what you dress as. It’s like for a kaleidoscopic mind explosion in 3D, you don’t really dress as anything. You’d come either on drugs or sober and you have your mind blown with 3D visuals. Or a future father’s day, like, do you come dressed as your father? Who knows? You can. Like, we always encourage it, but I think it’s more like â€“ the way we breakdown these events, it’s almost like a story, like a movie, like an event. Like, we have a trailer for it. We have a poster for it. There’s usually characters involved that end up usually hosting it and there’s like a backstory and something that makes it specific to being there rather than any other concert

The Owl Mag: So for this show we’ve got you guys, Vanaprasta, Queen Caveat, anybody else?

A.J. Jackson: Oh, and then the Project Caravan people are hosting it and we have a special guest for the encore.

The Owl Mag: And we don’t know who that is or we can’t say who that is?

The Owl Mag: Any role that these folks will play in Saturday’s Judgment Day festivities?

A.J. Jackson: There’s gonna be a contingency. I don’t know how many of them are gonna be there, but it’s the last show everâ€¦

The Owl Mag: Will they be doing anything? Are they going to hold up the signs?

A.J. Jackson: The host is gonna be a guy from Project Caravan. He’s gonna be very convinced and then, we’ll see what happens with the encore about midnight. So, if we hit midnight, it means they were wrong.

Aaron Sharp: Yeah. And that’s an excuse to party even harder.

The Owl Mag: So when we get to the show, what do we expect?

A.J. Jackson: Our Zombie Prom that came with like a personalized gift bag with like a lot of like brain stuff and the brain research stuff and like, you know, a signed poster. Also, it’s a random zombie and brain stuff and brain candies. This one we’re doing a rapture travel kit, which is a travel kit you take with you to the afterlife. Like, if you’re on a flight, like a transatlantic Virgin Atlantic flight or something, you get those little travel kits.

The Owl Mag: So your travel kit would consist of what?

Aaron Sharp: Yeah, and you can trim your nails, do your eyebrows. There’s a comb.

A.J. Jackson: Shave all of your body. And then, there’s gonna be a personalized Bible quote for each person in the travel kit, so, you know, you got to keep it sensitive and foreshadowing. But, yeah, then, also, we’ve got planned a doomsday clock that’s gonna be counting down the seconds left in the day. If we get to midnight, we all live.

A.J. Jackson: Then, we go out together.

The Owl Mag: So once the world doesn’t end, which we’re collectively hoping-

Aaron Sharp: It’s guaranteed. We can’t answer that question, ’cause that would be undermining the Holy Spirit.

A.J. Jackson: It’s a Catch-22. It’s like if we answer that question it’d be unanswering the world.

Aaron Sharp: You just can’t do it. It makes sense.

The Owl Mag: But you’ve got to ask the question: what’s the point if you’re going die? And since Judgment Day is going happen, how do you prepare for it? What do you do? What does Aaron do?

Aaron Sharp: Well, I’m gonna wash my body and try to get all the scent off. I use Lava soap, ’cause it has pumice in it and you can really, really scrub.

Aaron Sharp: Yeah, isn’t it? I’ve always thought about that.

Aaron Sharp: I didn’t get that memo.

A.J. Jackson: Yeah, I didn’t know. I didn’t know that. But, you know, anyone that â€“ we encourage anyone that thinks the world’s gonna end to come to The Roxy. Most people there, probably, are not gonna think the world’s gonna end, I’m just guessing. Not that many people there, probably, are buying into Family Radio’s campaign, even though they have great billboards.

The Owl Mag: You guys are little prolific on the idea side.

A.J. Jackson: It makes it fun though. You know, it makes every experience different.

A.J. Jackson: We did Rock & Roll Circus in New York and Minneapolis. But like the Zombie Prom, I think we’ve been asked to do it in other cities, but I think now it’s finally something we can take on the road a little bit more too. Or Judgment Day, obviously, is not something that we can do again until 2012.

A.J. Jackson: Part of this belief, Judgment Day is the beginning of the end of the world. The world ends on Judgment Day, but it officially goes black on October 21st.

Aaron Sharp: Right, ’cause you have like some leeway so, like, you know, get your belongings, say goodbye to your wifeâ€¦

A.J. Jackson: But, no, no, no, everyone’s like dying. Everyone’s gonna be dead on the 21st. Everyone that gets saved goes up the 21st [snaps fingers] like that.

A.J. Jackson: The earthquakes start. The fire starts. People are starting to die.

The Owl Mag: That’s another idea.

The Owl Mag: And burn The Roxy down while you’re at it.

A.J. Jackson: That sounds fun. I mean, would you really want to be saved and miss out on all that adventure? Dragons, earthquakes, fires â€“

The Owl Mag: Earth swallowing you up.

A.J. Jackson: I mean, that’s â€“ that’d be interesting. That’d be something to experience right there.

The Owl Mag: Six months’ worth of that.

A.J. Jackson: See that’s the thing. I was talking to the guys from Family Radio and he said, “Oh, you know, we haven’t quite deciphered that yet. We think it might be based on, you know, starting in New Zealand where the time zones happen and the,” he goes, “you know, progressing around the world. Personally, I think it’s just gonna happen all at once, though.” I went, “Oh, you guys should probably figure that out.”

The Owl Mag: There’s got to be a South Park episode on this somewhere.

Aaron Sharp: But, seriously, there’s got to be a South Park episode about this.

A.J. Jackson: I was like, “Man, you should probably figure that out pretty soon, huh? You got a week left.”