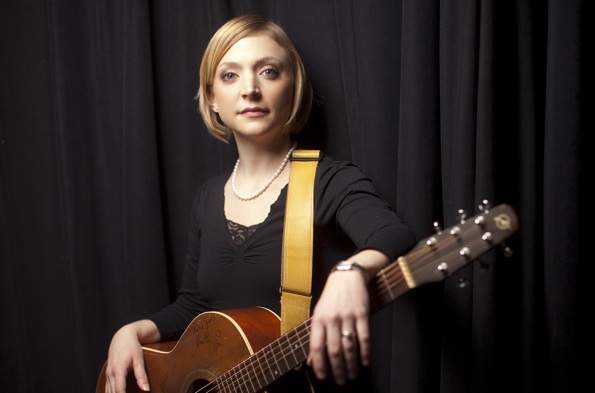 Eilen Jewell introduced me to an accessible form of Americana blues rock. As I came into my own as a listener, two things slowed my appreciation of anything that could be called country or blues. I was rebelling against what my father loved by rejecting the blues, and conforming to the New York-centric view that country music was somehow inferior to most other forms. I’ve grown a lot since I held these beliefs, and I attribute a lot of that growth to Eilen Jewell and her band.

Jewell is a singer/songwriter/guitarist. Her band consists of her husband and drummer, Jason Beek, upright bassist Johnny Sciascia, and guitarist Jerry Miller. Eilen is originally from Idaho, but the band has been based in Boston since it formed in 2003.

The first time I heard her was in July of 2008 at the Finger Lakes Grassroots Music Festival. She and her band opened for Lucinda Williams who was headlining the festival. Eilen Jewell blew me away.

I think what makes Jewell stand out is her versatility. Much like Grace Potter and The Nocturnals, Eilen Jewell crosses genres so seamlessly from one song to the next. This allows each tune to hold its own, and never sound too much like the one before or after it. One song will be straight rock, the next will twang with country sensibilities and the one after that will be a blues track.

I got a chance to talk with Jewell about her music:

The Owl Mag: Can you tell me about your guitar? Do you still play with the one that has signatures on it?

Eilen Jewell: Yea, I do. Although, now it has a couple of more signatures on it. This year I added Wanda Jackson and Emmylou Harris, and last year or the year before, Mavis Staples…Emmylou Harris is definitely a hero of mine. I’ve done shows with and been influenced by all of the ladies on my guitar. My own personal hall of fame.

The Owl Mag: What kind of guitar is it?

Eilen Jewell: It’s just a little Seagull Guitar. I forget what model, but it was the one that I could afford that sounded the best. I think it’s a great little company, that Seagull. They tend to make guitars that sound really good but don’t necessarily look really flashy, so I feel like you spend your money on the sound rather than the appearance of the guitar. They look really humble, but I think it’s just been such a great little guitar for me. I’ve become very attached to it.

The Owl Mag: What’s life on the road like?

Eilen Jewell: Every day is a new battlefield, a new adventure. It has a lot of challenges. It’s exhausting. Even when it’s really fun and really good, it’s exhausting. It’s great though; I’m really loving it. I’m restless when I’m not on the road. I think that’s a sign that I really love it.

The Owl Mag: Tell me about something fantastic you’ve seen while touring.

Eilen Jewell: In Australia we pulled up in this cafe-type place to get a snack, we parked the van, got out and we saw a koala in the wild. Just sitting in a tree being really cute. That was exciting to me. I like animals a lot, so that was really one of the highlights of the whole touring thing so far. I never thought I’d see a koala in the wild.

The Owl Mag: Do you have a tour rider?

Eilen Jewell: Yeah. Our rider calls for a 750mL bottle of Jameson Irish Whiskey. That’s about all we ask for: hotels rooms, food, and whiskey… We’re pretty easy to please, really, just give us the Jameson.

The Owl Mag: Can you talk about your new album a little bit?

Eilen Jewell: It’s all originals. Fourteen of them. And it’s the first time I’ve ever incorporated instrumentals. I kinda see it as a blend of country music, rockabilly, rock and roll, blues, it’s a little of everything I think.

The Owl Mag: I love the horns (on the album). Who’s playing that?

Eilen Jewell: The horns, that’s a musician from the Boston area named Dave Sholl. He’s been in the music world for quite a while now. I became familiar with him through Johnny Sciascia, the bass player in my band. He recommended him for playing horns and I’m glad he did ‘cause I think he sounded great. We really wanted an old-school back sound, kind of pre ’70s really, ’50s and ’60s-sounding horn, so David really knows that era well, he knew how to get that kind of surfy back sound.

The Owl Mag: Have you played here in San Francisco before?

Eilen Jewell: We’ve played San Francisco a handful of times. We’ve never played Slim’s before. I’ve heard really good things about it. The last time we played SF was at Cafe DuNord and the audience was awesome and we never wanted to leave.

Signature Sounds Recordings released Eilen Jewell’s latest album Queen of the Minor Key in June of this year. Find out more at http://eilenjewell.com.