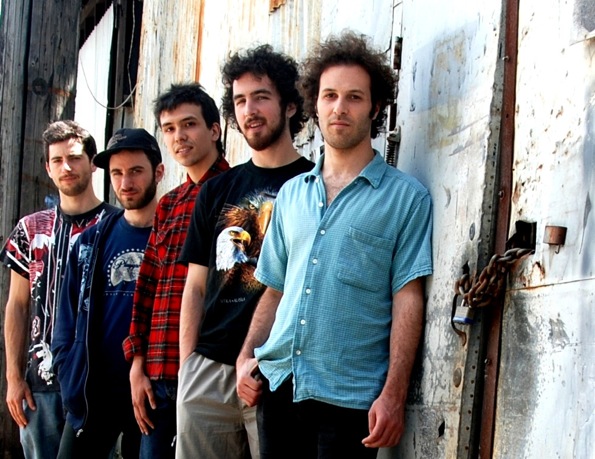 Blind Willies have created their own nook in the music scene. Their latest album, Needle, Feather, and a Rope is radically different from their previous work. Alexei Wajchman (vocals, guitar and harmonica), Misha Khalikukov (cello), Daniel Riera (bass), Max Miller-Loran (keyboards, trumpet) and Adam Coopersmith (drums) have created rock songs, some acoustic and some that are even… circus-like? Frontman Alexei Wajchman spoke with us about his influences, the band’s weird experiences at shows and their upcoming gigs.

The Owl Mag: You got your start as part of a duo that released an album while you were just a freshman in college. How did that feel?

AIexei: I was thrilled. That’s when I first realized that’s what I wanted to do. It just started to take over more of my interest. It’s what I enjoyed doing the most. We recorded that album in a tiny home-studio in San Fransisco.

The Owl Mag: What do you hope to accomplish with this latest album?

Alexei: Well, I wanted the sound to be drastically different. That came easily by just having more members. Production wise, I also wanted it to be slightly slicker. I wanted this record to be recorded in a large studio.

The Owl Mag: What is your favorite song to perform live?

Alexei: I enjoy “Last Drop of Midnight.” We do an electric version live. I just love the melody of that song. lt has a very traditional sounding melody.

The Owl Mag: What has influenced your sound the most?

Alexei: I was inspired by my older brother to pick up guitar, learn songs and write my own. His vocal style is very unhinged. When I first started, my vocal style was very smooth. Then I started going to his shows and hearing his vocals and I wanted to be like him sound like that.

The Owl Mag: How long have you been playing?

Alexei: I’ve been playing since I was 14. I started learning Nirvana when I was 14.

The Owl Mag: Do you write all the songs, and what is your process?

Alexei: I wish I had a set process. A lot of the times it’s waiting for the right words to come. Often I’ll hear the sound of a line, and not have it clearly. I’ll just have to work on it until it comes and makes itself clear.

The Owl Mag: How old are you?

The Owl Mag: Are you excited about that?

Alexei: I am definitely excited about it. I think I’m in a good place to turn 25. The cello player, keyboard player and bass player are 24. Our drummer is turning 26.

The Owl Mag: How did you think of the song “Jezebel” from your latest album?

Alexei: “I had read the story of Jezebel in the Bible, and she is made out to be this unchaste, evil woman and I just wanted to put a different spin on it. To me she came off as a strong, independent woman.

The Owl Mag: If there was one musician, dead or alive you could talk to or jam with, who would it be?

Alexei: I’d love to sit down with Bruce Springstein. One of my favorite all-time records is Nebraska. I’ve listened to Nebraska over and over again in awe. So either him or Patti Smith. I once handed Patti Smith a CD. I was in New York and went to the opening of a movie that was about her, and I walked up to her afterward and told her that I loved one of her covers so much that I did my own version of it. She put it in her pocket and walked away.

The Owl Mag: When you’re not making music, what are you doing?

Alexei: I teach music to preschool kids. We’re just hanging out and having fun. I teach them to sing along.

The Owl Mag: Do you guys use a set list at shows or just wing it?

The Owl Mag: What’s the weirdest thing that has happened at a show?

The Owl Mag: When and where is your next show?

Alexei: At Amnesia, on June17 with Danny Cohen. This will be our first time [at Amnesia]. I’m very excited to play with Danny. He’s been around a long time, and is a very quirky songwriter.

Alexei: The music scene is so diverse and scattered now. There are so many different types of bands all in the same space. It’s very difficult getting all through that. I’m not sure where exactly we fit in. I’ve always had trouble figuring that out. Some people see us as Americana, but I don’t necessarily think we’re just an Americana band. So usually I’ll just say rock. We have some rock songs and four acoustic songs [on this album].