Day 3 of Coachella 2012 Weekend 1 started more-or-less the night before, as various campsites immediately started bumping The Chronic once Radiohead had left the main stage. All was not chill for the final day, however. The adrenaline that propelled Day 2 gave way to some legitimately exhausting sets filled with dancing, moshing, and enough stage antics to warrant an entire movement. (Hey there, Hologram Tupac.) Kicking things off with an ass-kickingly good set at the Gobi Stage was London band Fanfarlo, whose performance warranted all the hype of their most recent album, Rooms Filled With Light. Sophomore slump this isn’t. 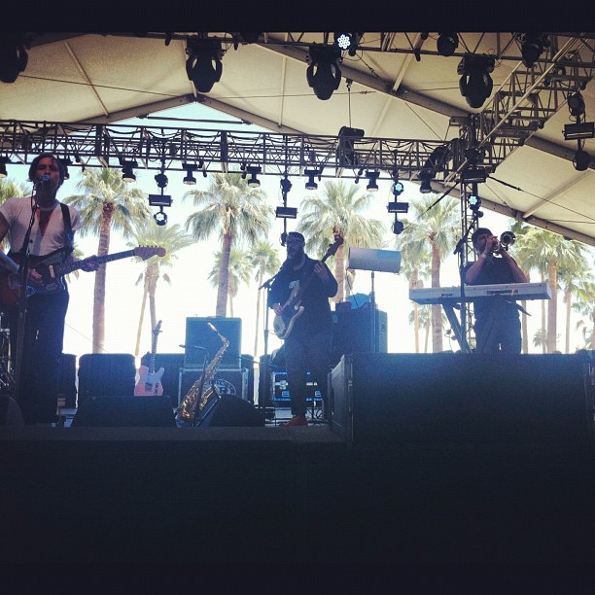 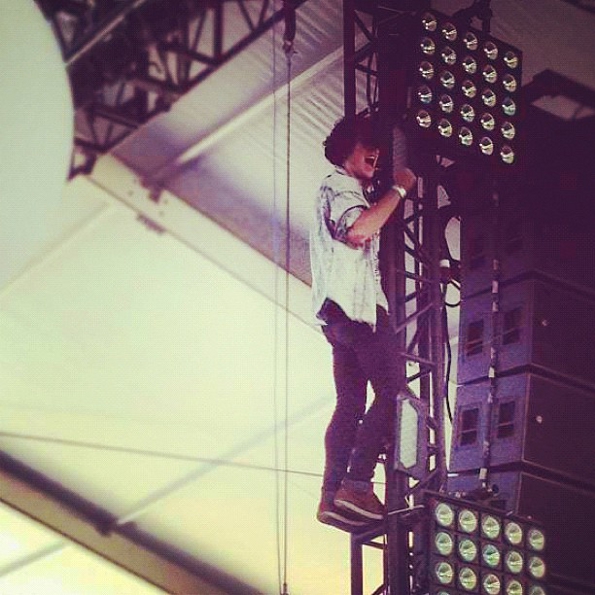 Oberhofer
Oberhofer started soon after at the Mojave stage. Riding high off the very recent release of their debut Time Capsules II, the band seemed a little more than “high on life,” with frontman Brad Oberhofer a ball of energy and intensity that eventually propelled him up the stage left truss and even on the ground, convulsing with musical delight. The band is known for their “oohs” and “aahs,” and played a set as singable as it was danceable. 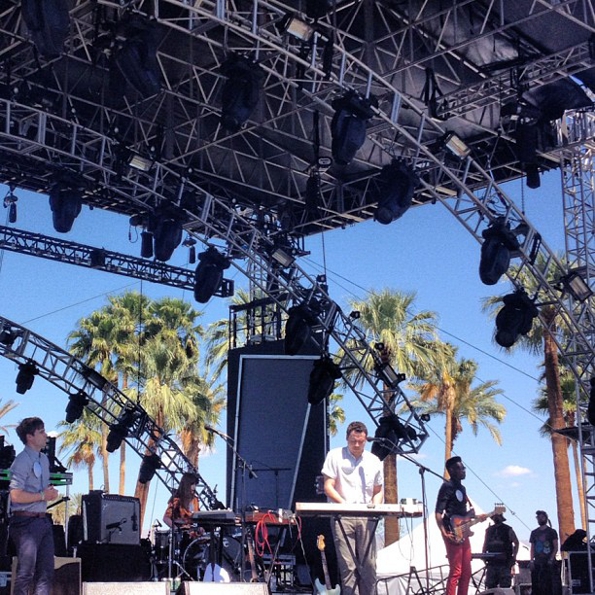 Metronomy
Sunday also saw the typical warm-to-sweltering weather most Coachella fans are accustomed to, which made for some pretty sweaty sets at the Coachella and Outdoor Stages. Metronomy brought the boogie and their usual push lights, playing a solid set of old and new. Sadly, a bright and sunshiny day diminished their usually fantastic light show, but the crowd’s energy combined with the band’s urgency more than made up for it. The Outdoor Stage finally hit its mark in sound quality too. A little less wind definitely helped the cause. 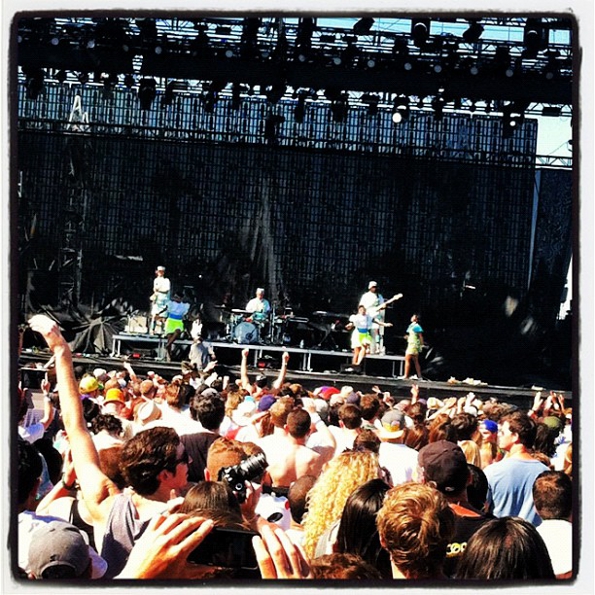 Santigold
Santigold was spot-on for her set at the main stage, playing hits “L.E.S Artistes” and “Creator” and upping the ante with a corral of dancers in horse costumes. The bold singer even brought a few fans onstage for the party. “Shove It” was a definite highlight, played with all the confidence and bravado the song deserves. There was just enough of a break to check out more of the food vendors, the super-creepy charging station filled with old televisions, (which recharges your phone and is headache-inducing for humans) and some of the new art installations, including a giant moving flower. 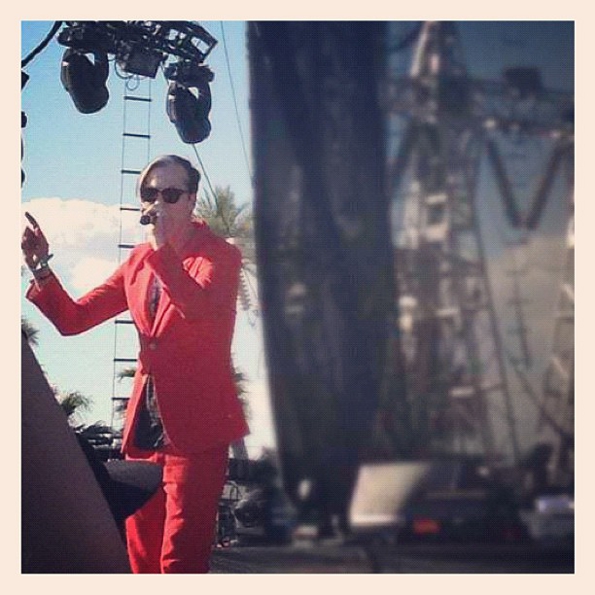 Fitz and the Tantrums
After a good amount of hydration, it was back to the Coachella stage for Fitz and the Tantrums. The LA band had many a new converts in the audience, playing from the acclaimed Pickin’ Up The Pieces and even whipping out their Raconteurs cover “Steady, As She Goes.” Their set also saw the debut of a new song, “She’s Out of My League,” a mid-tempo sing-a-long of a track. 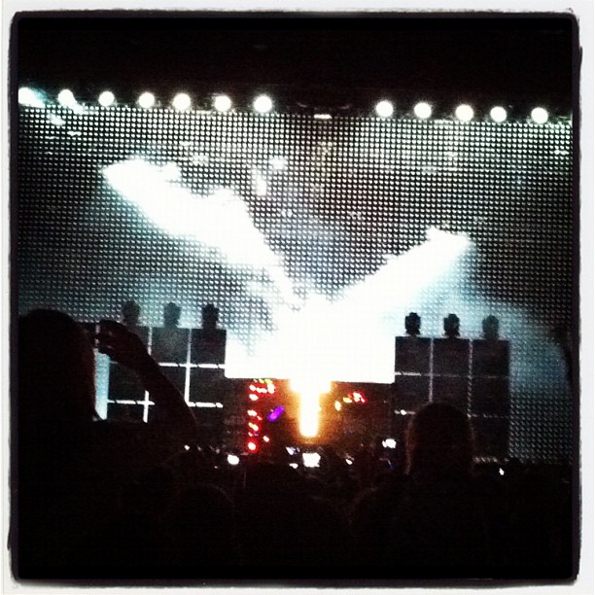 Justice
Speaking of long breaks, it took Justice almost half an hour to take the stage, a shock to those accustomed to the usual punctuality of the festival. Sadly, a later start meant for a shorter set, though there were seemingly no complaints, as Justice cut through their set at a fever pitch, not saying a damn word. As evidenced by their passionate audience, their music definitely speaks for itself and so did their stage set-up. Video walls were blazing with light and the cross centering it all flashed to the music in a blaze of light and intensity. 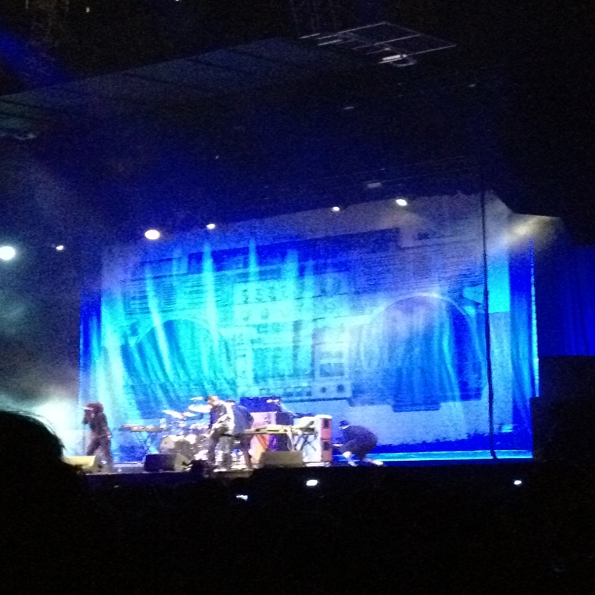 At The Drive-In
The recently reunited At The Drive-In were up next and brought the only legitimate mosh pit this owl had the privilege of taking part of. Frontman Cedric Bixler-Zavala was strange as ever with stage banter more reminiscent of that homeless guy who thinks aliens were implanted in his right earlobe. Nestled in a mostly blue-lit stage and playing in front of a giant ghettoblaster banner, the band closed things out with their mega-hit “One-Armed Scissor,” not missing a single beat. Boy is it good to have At The Drive-In back. 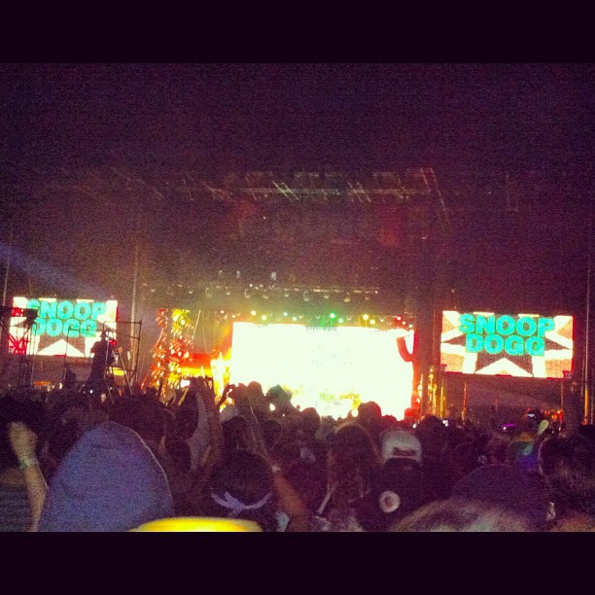 Snoop Dogg and Dr. Dre
Closing things out was one of the most grandiose of rap sets we have ever seen in our lives. Dr. Dre and Snoop Dogg took us back to the beginning, with Dre’s first smash “Deep Cover” and the duo’s “Nuthin’ But A G Thang,” and “The Next Episode.” The set bridged the gap between old and new with Wiz Khalifa as the first guest performing “Young, Wild & Free” with Snoop. The rappers paid tribute to Nate Dogg, brought out Dre protege Kendrick Lamar, and soon confirmed the rumors swirling that 50 and Em would be in attendance. Of course, the biggest highlight and perhaps riskiest move came in the form of a hologram. After reppin’ the west side with some “California Love,” Hologram Tupac took the stage, rapping “Hail Mary,” and soon enough, evaporating in a burst of light.

If Weekend 1 was any indication of the insanity that Weekend 2 is set to be, expect bigger, better, and stranger from the festival that is fast establishing itself as one of the grandest in the world.

Check out our Day 1 review here and Day 2 here.