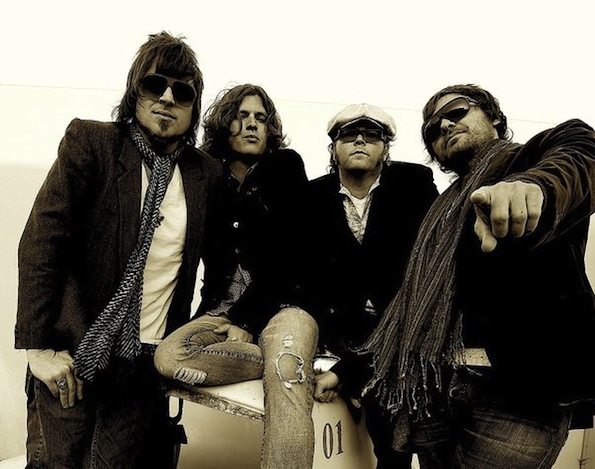 Back in the ’70s, there was a certain texture and tone to that sonic thing reverently called “rock and roll.” Amid the crunch of guitar riffs and drum thunder there was an energy and underlying current of blues and soul. If that aural image leaves a sweet taste in your mouth, then introduce yourself to a band keeping the flame of iconic sounding hard rock alive: Los Angeles’ Rival Sons.

You could keep it simple and reference them as a “throwback” band a la Zeppelin; that’s fine because it gives the head something familiar to relate to, and the truth is they do kind of dress the part. But if you want to dig the real intent of Rival Sons, just connect the roots of the old, which will bring you to the sound of the new.

Jay Buchanan (vocals), Scott Holiday (guitar), Robin Everhart (bass), and Michael Miley (drums) make rock music that’s reminiscent of the heavy rhythms and fuzzy grooves that used to explode from the consoles of rock stations from back in the day. There’s a beautiful, live wire of expression and true grit in Buchanan’s bluesy tenor and when he lets loose with his lung-full wail, without fail, it will tap Robert Plant on the brain, but if you listen just a little closer you’ll here something from Detroit on its way to church. Behind Buchanan the boys in the band throw down with a unified tightness made for shaking your ass. You’ll dance like it’s 1972 and you will thank them for it. The songs are immediate, loud, raucous, urgent, and dirty-retro yet originally vibrant. It’s no surprise that Rival Sons are favored sons at West Hollywood’s Viper Room and The Roxy where many a night they’ve made a packed room and its walls sweat from their collective swagger. Opened for AC/DC? Yep. Toured with Judas Priest? Uh huh. So much raw sound refined by Everhart’s thick and meaty bass lines and Miley’s rolling back beats, Rival Sons boasts much funk and soul alongside Holiday’s edgy and psych rips on guitar.

They’re one EP and two albums into their career, and a great listening place to start is with their latest CD, the June release Pressure and Time. The title track and “Burn Down Los Angeles” are but two samples of how hard Rival Sons can hit; “Only One” and the slightly ethereal loveliness of “Face of Light” are the flip side. NOTE: the outro to “Face of Light” is ridiculous in a good way.

Rival Sons are set for a fall tour supporting Evanescence and if you’re a fortunate son or daughter then they’ll be coming to a city near you: