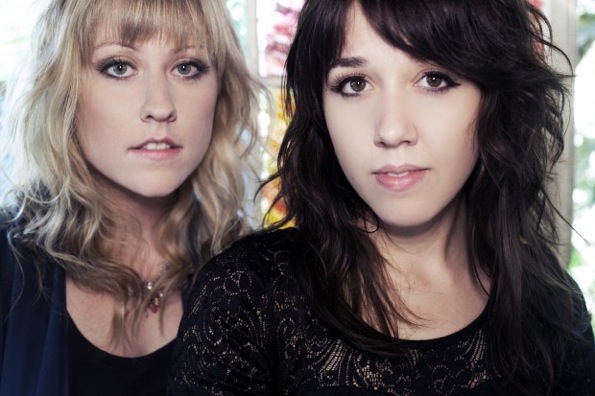 At one time or another we’ve all been guilty of taking cheap shots at indie pop in an attempt to disguise our actual affection for it. Not only is this a common behavior exhibited by children, but it is also seen in adults who can’t come to grips with their visceral connection to indie pop. What’s the matter people? If our entire music collection consisted of intensely thought provoking doom and gloom, rainbows and kittens would cease to exist. We all need catchy hooks and upbeat melodies in our lives. Enter Black Kettle.

About a year ago, Keeley Bumford (vocals/keyboards) and Kailynn West (vocals/guitar) traded in harsh snowy Boston winters for perpetual Los Angeles sunshine after the pair graduated from Berklee School of Music. Since relocating to Southern California, Black Kettle has held its own playing a string of shows at SXSW, Hotel Cafe, and Viper Room and has gained recognition from LA’s Deli Magazine as Artist of the Month in March 2011. The duo’s debut self-titled EP, recorded at Sound City Studios, is short and sweet and only provides a snapshot into their world.

To know this band is to see the on-stage chemistry and dynamic between Bumford’s outgoing personality and West’s quiet demeanor. Together, their playful keyboard and guitar arrangements evoke a sense of whimsy easily held captive by your brain. The songwriting is seemingly grounded in tangible life experiences of loss and unrequited love and Bumford’s sweetly honest vocals (with a dash of sassy soulfulness) provide additional depth and well-roundedness to this two person band. Though West describes the EP as being “full of hate,” any twinges of bitterness come from a human place as everything about Black Kettle indicates that they tend to side more with rainbows and kittens than the vindictive or morose.

Catch Black Kettle in Los Angeles at the International Pop Overthrow Festival at the Echoplex on August 9th and in West Hollywood at Bar Lubitsch on August 23rd.

Paint the Town by BlackKettleMusic