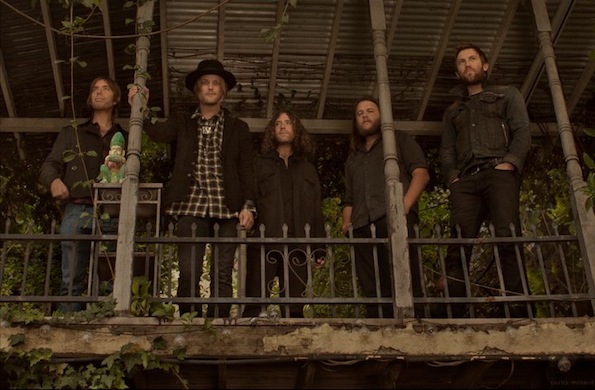 Since they’re now based in Los Angeles they qualify for the SoCal Report and I’m glad for that. Los Angeles by way of NYC by way of London by way of Sweden. Awfully roundabout but, hey, it got the job done.

Alberta Cross is an anagram. Of what, you ask? I have no fucking clue; almost five years and they still won’t say.

Other than an inscrutable puzzle, Alberta Cross is the baby of Petter Ericson Stakee (vocals, guitar) and Terry Wolfers (bassist). Along with Sam Kearney (guitar), Austin Beede (drums), and Alec Higgins (keyboards), they float somewhere on the waves of bluesy roots rock while creating a sense of space and rocking spaciness. The acoustic and electric guitars and keys layer up and out for a sound that feels like it has no ceiling, yet sources from familiar terrain such as the American South. Stakee bears incredibly distinct vocals; they’re always on the higher end of the scale, piercing with a good chance of drawing a lonesome prairie image from the mind. Thom Yorke to Neil Young and back again.

Snapped up by the Dave Matthews-founded label, ATO, Alberta Cross has had quite a bit of touring under their belt with the likes of Oasis, Black Rebel Motorcycle Club, Dead Confederate, The Shins, etc., as well as working the festival circuit which has earned them a healthy following. Now they’re currently working on a new album, but do have two records and one EP behind them to dig into. Where their heavily acoustic and folk-minded 2007 mini-album The Thief & The Heartbreaker was a well-received intro to their world, the 2009 follow-up Broken Side of Time was a darker, emotionally richer storm of weighty grooves, sprawling guitars, echo, and reverb washing over a British/Swedish take on southern garage rock.

Don’t think too hard on that. Instead, see (or hear) the crash and swirl of the noisy jam “ATX.”

This fall finds Alberta Cross on an East-to-West tour with the AMAZIING Portugal. The Man. This will be a double bill of awesome that your ears will want to catch, so get on that. Tour dates below, lovelies.

*= Opening for Portugal The Man