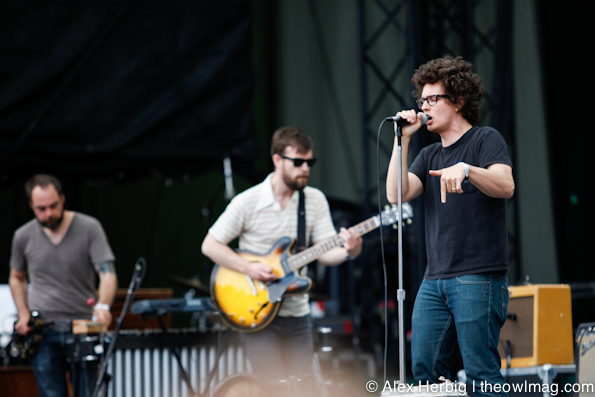 If you wandered into The Gorge last Saturday afternoon, you may have wondered where the sound of a soul-revival was coming from. Once you found its source, you were most certainly surprised. Seattle soul band Pickwick has crashed into the music scene this past year, quickly becoming a local favorite. Their first ever appearance at the Sasquatch Music Festival landed them at the main stage; to say that they killed it is an understatement.

Lead singer Galen Disston packs a powerful voice that contrasts with his black frame glasses and crazy curly hair. He looks far more similar to his hero Bob Dylan than he does to any soul musician. “I will never stop loving folk,” Disston said. “Whenever I feel like things are off, I go to the Bob Dylan Live ’66 album.” The band of five met in Seattle and spent their first three or four years together playing folk. Now their sound is radically different. “It was an organic transition that happened in the basement,” Disston said. “Everybody’s role got simplified and we started writing more collaboratively.”

Their debut album Myths is a mixture of rousing melodies and classic soul; lyrics are perfect for singing along, yet are slightly disorienting and extremely ambiguous. In “Hacienda Motel” Disston croons, “The shit was going down/the naked man was singing/but he didn’t make a sound.” Unlike many artists, Disston doesn’t write songs with his heart on his sleeve. Instead, he challenges fans to decipher lyrics for themselves. “My songs are all narrative, they all have a subject,” he said. “They’re all about something that surprised or inspired me.”

Elaborating on his inspiration, he mentioned the mixture of the mundane with magical, and referenced the song “Baby, We’ll Be Fine” by The National. “He’s worried about impressing his boss, and then starts floating around in the air with his lover,” he said. “Incredible.” Pickwick‘s most formative time, Disston said, was the time they spent playing in front of nobody. Since their rise in popularity, Pickwick has been out on the road, more specifically in an old van, which distinctly smells like cats, given to the band by Disston’s sister-in-law.

A husband and father of two, Disston said that even though it’s hard to be away, touring has been an amazing experience. His favorite part of performing live, Disston said, is duplicating what happens naturally in their basement. “The best shows are when we enter into a song and stay there,” he said. On the Sasquatch main stage, before breaking into a cover of Lou Reed‘s “The Ostrich,” Disston said to the crowd, “This is a lot different than our basement.”

We’re sure glad you’ve come out of your cave, Pickwick.