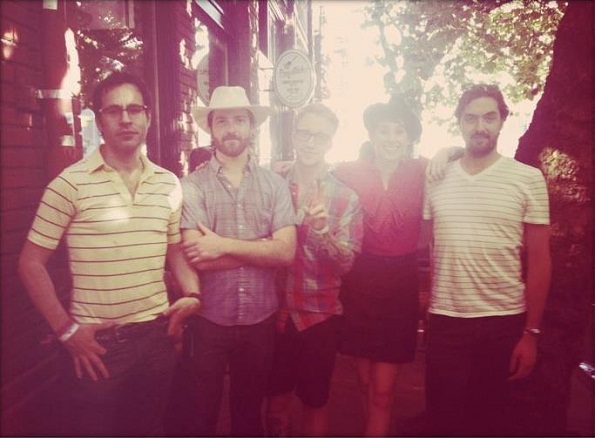 Confetti, propelled by leaf blowers, shoots out of water coolers. Seattle band Campfire OK is all about surprises.

Songs off of their debut LP Strange Like We Are feature a delicious cacophony of guitar, drums, keys, horn, and banjo. Their live shows perfectly display their sound, an eclectic mixture of rock and folk, rooted in pop. When asked what the band hopes to accomplish with live performances, drummer Brandon Milner said, “Are you familiar with the drug crystal meth? Like that but with feet.”

Vocalist Melodie Knight, who spent the set shaking, jumping, and dancing through the audience said that she wants to create an experience. “I want to evoke feelings attached to a song,” Knight said. “And they’re Mychal’s songs so it’s acting essentially.”

Lead singer and writer Mychal Cohen said that the band doesn’t lie in any genre. This can be attributed to their conversational way of writing a song. Cohen writes the song form and then the collaboration begins. “We all play a lot of different instruments, so we’ll say, why don’t you try this?” Milner said.

Campfire OK began as a solo act. Their creation story, which Cohen said is extremely long, is rooted in the fact that the band gradually accumulated members over an 8-month process. Their next album, which is finished, is more of a band record than a solo one. “It’s very different yet very similar,” Cohen said. “They’re still my songs but we’re using different instrumentation, both simpler and more complex.”
“There aren’t any rock clichés,” Cohen said. “Well, except for the good ones,” Milner added.

Campfire OK will be playing at The Crocodile on July 13th. The venue is building a lighting setup just for the show. “We have a lot of surprises in store for people,” Cohen said.