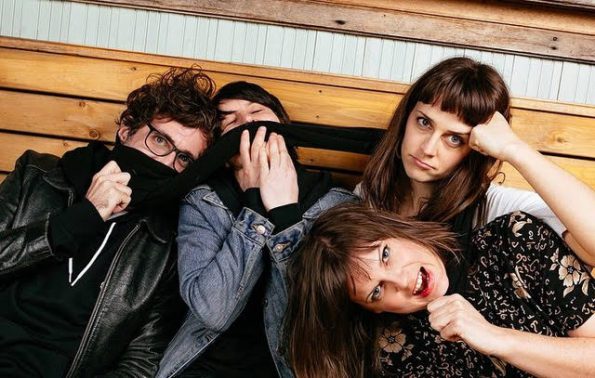 It’s a recurring riff here at the Nest that Australia has been punching way above its weight class when it comes to providing new sounds, and our latest obsession is the aptly named Tropical Fuck Storm. A Laughing Death in Meatspace is their debut (released down under in May on their own TFS Records + Mistletone Records via Inertia, and out in US/UK/Europe in October on Joyful Noise Records), and it kicks off (in both the American and British senses of the phrase) with “You Let My Tyre’s Down,” a gnarled clarion guitar call giving way to an arresting opening:

The intensity builds throughout, but it’s the controlled dynamic shifts and cryptic resolution that set it apart as a haunting gem. It sets a high bar that the rest of the LP manages to live up to, melding a jaundiced eye on contemporary events with a wave of guitars that’s by measure scalding and dispassionate. Other highlights include “The Future Of History,” “Two Afternoons,” and “Rubber Bullies.” In addition to touring, the quartet comprised of Gareth Liddiard and Fiona Kitschin (The Drones) along with Lauren Hammel (High Tension) and Erica Dunn (Harmony/Palm Springs), recently did a special pair of sold-out shows in Melbourne providing a live score for screenings of the Coen Brothers No Country For Old Men, which certainly helps lock in their aesthetic. They made a brief fall run of shows, and hopefully will be back for a more sustained jaunt next year.