“Wolf’s Law” by The Joy Formidable 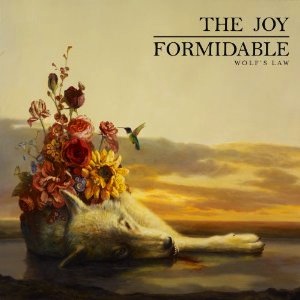 Nine feet of snow in the middle of winter in Portland, Maine seems to be the place you want to escape from, not to. But Ritzy Bryan, Rhydian Dafydd, and Matt Thomas finished recording their sophomore album, Wolf’s Law, in a log cabin in the woods. Recording the guitar tracks, vocals with their mobile studio; later recording the orchestral bits and the drums in London, Ritzy goes on to say, “… [there’s] spontaneity in the way that we track them. And capturing them as they’re being written certainly seems to be the best way for us.”

Fortuitously, it works for us too. Their debut, “The Big Roar” was awesome and we all were hoping this album would avoid the curse of sophomore album suckage. Having a song featured on the Twilight movie franchise soundtrack and opening for the Foo Fighters on tour is big. The trio came back bigger. “Maw Maw Song,” a heavy thumping shout out to ’70s rock sits right next to “The Silent Treatment,” a spare acoustic gem. The first single, “The Ladder is Ours” is that blend of orchestral and rock that these three do so well. Not quite as formidable as they might be one day, still we are under the sway of Wolf’s Law.