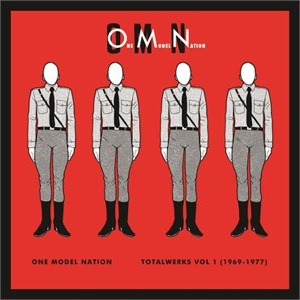 On his latest project The Dandy Warhols’ frontman, Cortney Taylor, takes a leap into the world of fiction. Along with actor Donovan Leitch and illustrator Jim Rugg, he has developed a graphic novel that revolves around imaginary band One Model Nation – a synthpop act whose affiliation with left-wing militant group Baader-Meinhof sets their career in jeopardy. Now this mystery band is coming to life on the debut album TotalWerks Vol.1 (1969-1977).

One Model Nation is a not so subtle reference to Kraftwerk both musically and stylistically. The sharp outfits, the repetitive synthesizer sounds, the minimalist aesthetics of the songs, it’s all there. One Model Nation, however, is a group of more dark-minded synthesizer wielders. On songs like “East Berlin” and “Russian Standard Time” the influences of dark industrial electro especially shine through.

As a conceptual art project this has its appeal, but as a separate entity the album seems rushed. Musical, political, and stylistic references are thrown into a blender and what you get is a rather kitschy cocktail. One Model Nation seems to be walking a fine line between flattery and imitation in their military boots, but at least they do it in style.