ALBUM REVIEW: “Too Young To Be In Love” by Hunx and His Punx 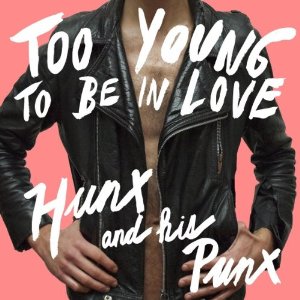 If Smith Westerns had a sassy gay cousin with a penchant for ’60s girl groups, it would be Hunx and His Punx. The Oakland quintet mixes lo-fi rock with bubblegum pop Ã  la the Marvelettes; with a healthy dose of moxie, Seth “Hunx” Bogart and his four “punkettes” turn the sugary genre on its head. Too Young To Be In Love is the band’s first proper studio release (after 2010’s Gay Singles, a collectionof previous works), and playfully reinvents the sounds and themes of old-school pop.

Bogart, who also made an appearance in Girls’ x-rated “Lust for Life” video, is hardly shy about his sexuality. As the flamboyant frontman of a self-proclaimed girl group, he also raises gender issues by his very presence. Too Young keeps these potentially subversive elements bubbling under the surface of its ’50s-style faux innocence, as Bogart’s nasal tone and coy delivery lets listeners in on the joke. The band’s four punkettes also move beyond the sweet oohs and ahhs of their predecessorsâ€”they add some serious edge. On songs like “The Curse of Being Young,” these contributions provide a modern twist and emotional focus.

Although the album gleefully pays homage to earlier eras, it does so without sacrificing authenticity and relevance. Hunx and His Punx have a spirit that transforms the familiar into something fresh and deliciously fun.