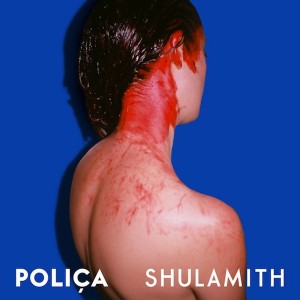 Describing Poliça can be a bit tricky, but just go with “lo-fi synth with heavy percussion blended into R&B slow jamz” and you’ve come pretty close. Sophomore album, Shulamith, handles that description well and delivers another strong showing for the unique Minneapolis-based group.

Opener “Chain My Name” starts everything off with a faster paced song than what fans may be used to, but it has the fantastic energy that’s experienced during their live show. The next few tracks align more with their first album sound with “Vegas” showing the benefits of having double the drummer (Ben Ivascu, Drew Christopherson) and “Warrior Lord” digging into Poliça’s sultry slow jamz side. Album highlight, “Very Cruel,” has the emotionally haunting vocals of Channy Leaneagh weaving their way through the dirty synth/bass beat created by Ryan Olson and Chris Bierden. The first single, “Tiff,” strongly anchors the more mellow, yet still dancey latter half of the album while final track “So Leave” quietly and gorgeously brings the album to a close.

Poliça produce another solid album that’s better with every play, allowing the listener to hear something new each time. If you’re looking to have an electric slow jamz dance party around your apartment, be sure Shulamith is on the playlist.