ALBUM REVIEW: “Out of Sight, Out of Town” by Standard Fare 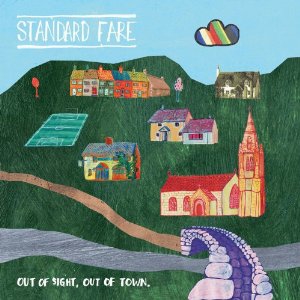 Standard Fare
Out of Sight, Out of Town
[Melodic Records]

From an outsider’s perspective, Sheffield’s charming, hilly landscape seems to possess exactly the kind of rainy-day coziness that would make you want to spend days in your apartment writing indie-pop songs. Yet the city’s own Standard Fare are not a typical bunch of C86-loving, taciturn outsiders; their music burns with a vibrant punk-rock edge, and its uncompromised energy paints the band as likely the most fun-loving people in all of South Yorkshire.

Standard Fare‘s second full-length, Out of Sight, Out of Town, continues their debut’s mingling of classically British quaintness and ’90s alternative radio power-pop. However, this year’s achievement seems more thematically serious (to the point of including poignant lyrics about the Holocaust) and musically focused (with memorable hooks balanced evenly through the record). The band is remarkably strong at crafting concise yet eclectic “bursts of ideas,” such as “Dead Future” – a song that recalls both Belle And Sebastian and the Pixies – and “Kicking Puddles,” whose angular guitar interplay is nowhere short of “progressive twee.”

My biggest gripe with the album comes with Standard Fare‘s most straightforward punk-rock moments, including “Bad Temper” and “Call Me Up.” Although both songs are pleasantly animated and cheerful, sounding like England’s response to Cloud Nothings, their melodies come off as rather commonplace. Occasional lackluster stretches appear in other parts of the album, too. Nonetheless, when Standard Fare counter them with a song that sounds like a terrific ska cover of an Ace of Base hit (“Half Sister”), all doubts about their unassuming talent and constantly-growing potential disappear.