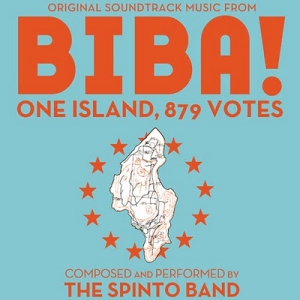 While putting the final touches on their newest album due out in 2012, the Delaware-based indie rock Spinto Band worked on scoring the soundtrack to the documentary Biba! One Island, 879 Votes by Benjamin Bloodwell. The documentary tells the story of two rivaling groups on Tinian — a remote island in the Pacific, and when it came to scoring it, The Spinto Band nailed it. Even as its own piece, their soundtrack is entirely independent of the film and definitely worth a hearty listen.

By the end of the short ten-track album, The Spinto Band manages to cover a ton of seemingly unrelated genres that flow seamlessly between each other and the band’s combination of harmonious instrumental guitars, percussion, and organ really works. The album’s first track, the slack key guitar-heavy, tropical-sounding “Biba Steel,” is reminiscent of the smooth island music you might hear on one of the classic early episodes of Spongebob, whereas tracks like “The Bandit” and “The Sheriff” are perfect examples of incidental Spaghetti Western music.

The Spinto Band‘s score to Benjamin Bloodwell‘s documentary is a true testament to their versatility and talent as musicians — it’s not every day you find an organ-heavy track that still manages to remind you of sipping a Pina Colada at the beach! This is an entirely different sound than we’re used to from them and sounds nothing like the band’s more popular tracks. Even in the absence of the familiar heartwarming indie vocals, The Spinto Band‘s instrumental composition delivers.

Lucky you, The Spinto Band is giving away the album for FREE right now.