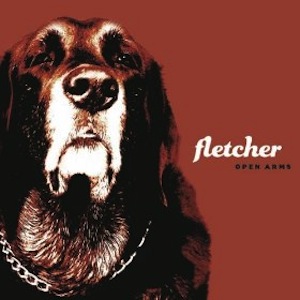 If you dislike bass grooves, drum fills, and anything to do with electric guitar, you will hate Fletcher. Their second EP, Open Arms, is the result of a tight power trio, with Oscar Baker on vocals and guitar, brother Harvey Baker on bass, and Tom Fry on drums. Over six songs, Fletcher expands on conventions of Brit-rock with universally strong instrumentation and prominent melodies.

Opening with the exciting cacophony of “The Road I Take,” the EP begins loud and moves (slightly) softer from there, not

that there’s ever a boring moment. Nothing sounds more welcome than the bass groove

of “Open Arms,” topped with tambourine and Oscar Baker’s reverb-heavy guitar chops and Julian Casablancas-like timbre. Unlike The Strokes, however, Fletcher never feels detached. The band is engaged and always coordinated, through the upbeat and charming “More Than You Can Chew” (showcasing Oscar Baker’s sweet falsetto) as much as the refreshingly dissonant “Cheesecake.”

Fitting, then, that closer “Look To The Clouds” does exactly that: it’s the one song where the trio really attempts to expand their sound into a more encompassing, overwhelming landscape with swirling, dreamy synths. And, just like every other song on this EP, they succeed.