ALBUM REVIEW: “No One Can Ever Know” by The Twilight Sad 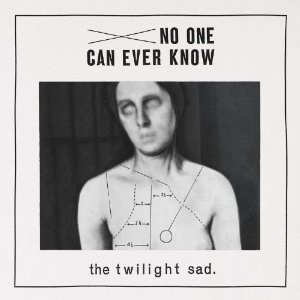 The Twilight Sad
No One Can Ever Know
[Fat Cat]

No One Can Ever Know is the third full length from the band from Kilsyth Scotland, and marks a big departure from their previous two records. Gone is the trademark heavy guitar wall of sound and in its place is a clean-cut synth-focused record. Although the record takes a new direction, it has stayed faithful to the dark themes that the band has become known for. James Graham’s vocals become the center of the record’s universe and his heavy, masculine voice sounds mature and composed like never before. I can’t make out what the hell he’s saying at times, but it always sounds good.

Graham is quoted as saying this record will sound nothing like the previous two, and he’s spot on. Instead the band hovers in a sonic territory evoking a sound akin to Dépêche Mode, Joy Division, and Interpol. Like Joy Division, there’s a heaviness and somberness to The Twilight Sad so they’re right at home with this sound.

I like the two previous records a lot, especially the urgent Fourteen Autumns & Fifteen Winters, but there wasn’t a ton of variation on the first two records. There was a feeling that The Twilight Sad may only have the capacity to sound one way. That sound is great, but it gave the impression that the band was limited. Here guitars are subdued and scarce. The drums pulse and create a sound that’s almost scary.

The new sound is different enough from the previous records to show the band in a new light, but remains true enough to the band’s roots that older fans will still appreciate the record.