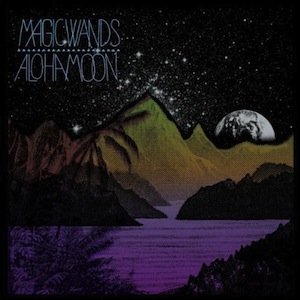 Husband and wife music duos are all the rage these days. Mates of State and The Weepies have found great success merging their professional and personal lives. Unfortunately, The Rosebuds found the “married music duo” road a little too rocky and divorced after three albums only to reunite for a heart wrenching fourth.

Chris and Dexy Valentine, the married music duo behind Magic Wands have received much praise on Magic Love & Dreams, their previously released EP from many music critics. So much praise in fact that they earned opening spots for the Black Keys, The Kills, The Raconteurs, and the opportunity to play at Lollapalooza and SXSW.

On Aloha Moon the band continues to deliver dark and dreamy pop gems that will be all the rage of electro-loving hipsters that can’t get enough of female fronted bands like Phantogram, The Sounds, Metric, and Via Audio. Standout single “Space” (listen below) is definitely the strongest track that could easily earn itself a spot on the next The Girl With The (fill in your own blank) soundtrack.

And if you can’t wait for that movie to be named or released, you could easily watch Gossip Girl or The Vampire Diaries to hear more from them.