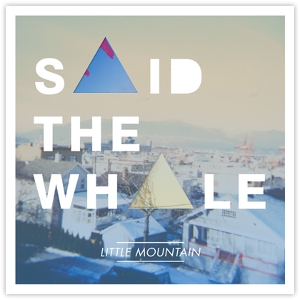 Canadians are wonderful. Or at least the four from Said the Whale are quite lovely. This past week I have listened and listened to their latest creation Little Mountain, set to be released March 6th. The outcome was simple: I’m still not done. It’s hard to be done listening to an album you like when it has fifteen tracks; it’s fifteen chances to find something new you like, or don’t. And I found a lot that I liked.

The vocals have a simplicity I found very refreshing; I could actually understand the lyrics. The first track “We are 1980” has a great chorus which made me feel like I was at a concert and part of a protest at the same time. The next track, “Big Sky, MT” is beautiful in its imagery and meaning; talking about the effort put into love to make it worthwhile. The whole album is wrapped up so delicately in the last track, with only piano and vocals on “Seasons.” This song may seem cheesy, but seriously, just try and listen only one time. The vocals in it are so gentle and sincere, you can picture the scenes of the relationship that you’re not even in. Probably the best way to sum up my view of this album is “Loveless,” a happy tune which sings of having a deep care for the original nature of someone- “How could I love you less, now that I know you more?”