ALBUM REVIEW: “If…” by Tidelands 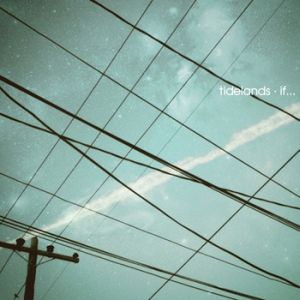 If San Francisco-based Tidelands’ first single, “Holy Grail” and resulting artfully masterful video collaboration with illustrator/animator Ami Kutata is any indication of things to come for the band, chances are amazing projects are on the horizon. Making their daring leap as a band onto the music scene, Tidelands’ first album is finally here: If… a somewhat neo-luddite ambient lament to returning to nature.

Orchestral swells provided by conductor Minna Choi and her Magik*Magik Orchestra embellish the soundscape of the album, flowering at all the right moments while lead singer Gabriel Leis’ sparse guitar and melodic crooning captivate in an effortless minimalism. Standout track “The Ship” is reminiscent of rolling oceans, sea shanties and The Shins’ nautical “Sea Legs” with an indie feel the likes of Snowglobe. Leis’ percussive vocals blend perfectly with Mie Araki’s driving drums. Almost every song has a journeyed feeling to it. Leis’ flugelhorn sails through loops of guitar and synth, eventually joining them on the closing track, “Marigolds”.

Though this is Tidelands’ first album, Leis and Araki are seasoned musicians, with Araki earning a masters in Jazz and Commercial from the Manhattan School of Music and Leis fronting the dream-rock band The Love X Nowhere where he first collaborated with Araki. If… is a beautiful indie force to be reckoned with, hypnotic in its musicality. Tidelands will be celebrating the release of If… July 26 when they take the stage at San Francisco’s Café Du Nord.