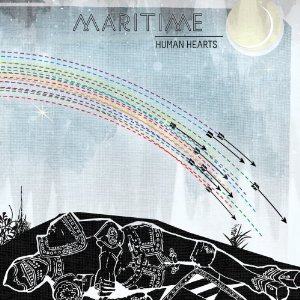 If the abominable snowman and the Maritime dudes made a love child (we’re assuming the abominable snowman has super-secret feminine wiles and a penchant for making hot, hot soup, among other things) then maybe more videos like “Paraphernalia” would be out there. The first music video off Maritime’s latest album, Human Hearts, was filmed in the middle of a Milwaukee blizzard. Opting for a swirling, frost-bitten backdrop drummer Dan Didier explains, “we tried to shoot in my backyard, but for some reason the storm didn’t seem violent enough. So we went to the lakefront by my house.”

Human Hearts is crackling with that search for violence, but only if the search was done in ’00s casualness and leaves time to banter and eat late-night pasta. “It’s Casual” opens with fast-paced guitars and the self-conscious question “we were warriors in the moonlight/am I right?/or was I wrong?” The indie-rockers still know how to throw together catchy pop songs, like in “Annihilation Eyes” and “Air Arizona,” and the tongue-in-cheek wordplay on “Apple of My Irony” cinches the album to a close.

A quick history lesson: Maritime (specifically singer-guitarist von Bohlen and Didier) emerged from the ashes of seminal emo band The PromiseÂ Ring (before emo became synonymous with cockatoo hair-dos and raccoon eye liner). Â Now signed under Dangerbird Records, Maritime’s newest release stamps out an emotional footprintâ€¦yes, even if you forgot the snowshoes.