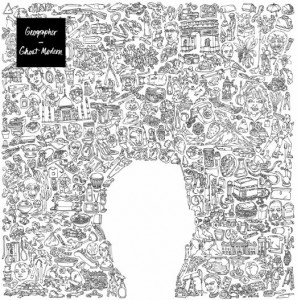 Geographer first became a thing on the East Coast, New Jersey to be exact, where Michael Deni released his first album under that name. Still, the band is often considered a San Francisco-based act due to its early touring days as a full band in the Bay Area. When it comes to Michael Deni and the rest of the Geographer collective, their music has never come off as inconsistent or unclear as the band’s true origin. The band’s latest effort, Ghost Modern, gives off a similar feel.

Much of their past work has put the listener in a fun, happy place, and that continues into 2015. Even on a more somber track, like “Too Much”, the subtle upbeat-ness of the track puts the listener in, at the very least, a relaxed state. This isn’t to suggest that the album is one-dimensional, of course. It’s an wholly complex work with a slew of instruments, ranging from heavy drum machines on “You Say You Love Me” to a harp on the closing “Falling Apart”.

In that sense, they’re as all over the place as their heritage as a band, but in terms of consistency and band chemistry, there is little to no ambiguity. That’s a good thing.