CD Review: Connected by The Bruises 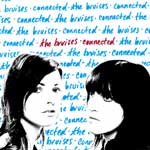 San Francisco female fronted band The Bruises prove that chicks rule as album Connected prevails as a poppy estrogen treat. Aja Blue and Jen Black, originally from Illinois, both showcase their respected creativity as they write/sing/play guitar on the album. Scott Tusa of Scissors for Lefty fame produced the album, which might give The Donnas a run for their reputation. Album highlights include the edgy “Hold Me Down” and “Here’s to Us” on the album, which is very buffered. “Found” has a very bohemian tone to it, unlike any of the other eleven tracks. This album has arrived at the perfect time, as the country has grown sick of the Spice Girls reunion.