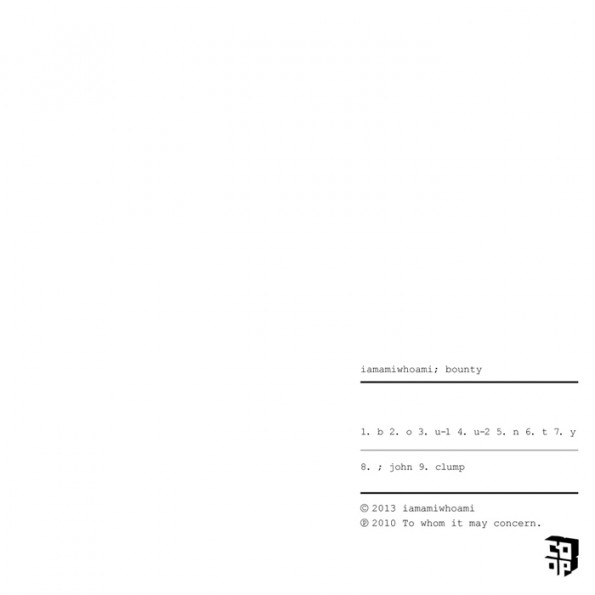 iamamiwhoami
bounty
[To Whom It May Concern]

iamamiwhoami is a bit of a mystery. It’s not so much a band as a multimedia explosion of dark Stockholm weirdness, dizzy electronic beats, and record label (To whom it may concern). Involvement of its artist-in-chief Jonna Lee wasn’t even confirmed until two years after the project emerged, and her production style is certainly unconventional. Lee, along with her fellow-Swedish producer Claes Björklund and video director Robin Kempe-Bergman, began to release gorgeously surreal videos on YouTube in late-2009 — and were met with views by the 100-thousands. Lee blurs the line between music and visual art, and her videos (cryptically entitled “Prelude 699130082.451322-5.4.21.3.1.20.9.15.14.1.12,” “9.1.13.669321018,” “kin 20120611”…you get the idea) create a synesthetic version of her hypnotic tracks.

The project’s latest, a 9-track LP called bounty, was released song-by-song on YouTube from March 2010 to August 2011. Repackaged as a bonafide album (of which iamamiwhoami only has one other, 2012’s kin), the collection of songs doesn’t quite feel complete, removed from their visual cues. Although bounty as an LP is an interesting and bubbly juxtaposition of eager electronics and slow-motion vocals about paranoia – like on “b” and “o” – iamamiwhoiami’s videos add much more to the experience. That’s not to say it isn’t enjoyable – Lee sounds a bit like a more abstract or drugged-up Feist, and lyrics about homicidal love (“o”) and her abysmal shriek into the void (“u-1”) are just weird enough to get into. “n” sort of sounds like a melody-starved Grimes, and “u-2” is a chaotic mess of aggressive electro-beats. If only there was a way to project iamamiwhoami’s videos onto the inside of your eyelids to really round out the experience.