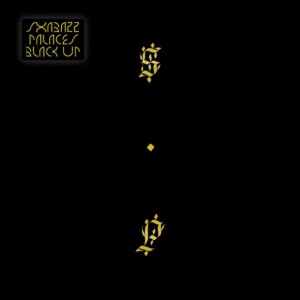 Shabazz Palaces is the current project of Palaceer Lazaro. You may know him better as Ishmael “Butterfly” Butler from the 90’s hip hop trio Digable Planets of “Rebirth of Slick (Cool Like Dat)” notoriety. With the release of their first full-length album, Black Up, Shabazz Palaces are breaking all the rap rules. Their track titles are long enough to be verses themselves, and Lazaro’s many mysterious collaborators go unnamed. Unlike the wildly popular OFWGKTA, who tweet every two minutes and diligently update their tumblr’s, Shabazz Palaces are maintaining a refreshing air of secrecy; allowing their music to speak for itself.

And it speaks volumes. Take the delightfully dark “An echo from the hosts that profess infinitum,” a track that begins with creepy looped children-of-the-corn vocals over reverberating bass and suddenly blossoms into sparse and spooky chimes. Unlike so many hip hop acts today, Shabazz Palaces have more than one trick up their sleeve. “Are you… Can you… Were you? (Felt)” is decidedly upbeat, as Ish raps about heaven, light, and truth over barely-there strings and sunny piano. “Recollections of the wraith” is a sexy joint; a bunch of heavy thumping beneath the soulful Oooh’s of a female vocalist and lyrics beckoning the listener to “space out” with Shabazz. The final track, “Swerve… the reeping of all that is worthwhile (Noir not withstanding),” combines the various twists and turns explored throughout the album into one eerie, sexy, catchy masterpiece.

Their rhymes are oblique, but on point. Their beats are experimental, yet well composed. Shabazz Palaces are the ones to watch in 2011. If you find them, let me know.