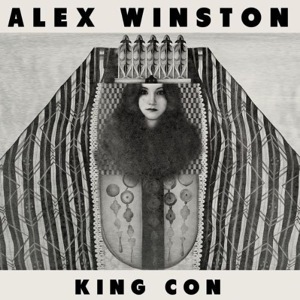 In 2011, little bits of Alex Winston’s King Con had been dropping around the internet, from a Star Slinger remix of “Sister Wife” to a Beach Fossils remix of “Locomotive” to a RAC remix of “Velvet Elvis.” And without any albums to her name, Winston sure was running an impressive gamut of collaborations, each one as excellent as the next. With the help of producers The Knocks and Charlie Hugall, Winston’s imminent 2012 release is here and does it live up to these teaser tunes? Yes. A thousand times yes.

With Britain delivering huge female artists like Florence Welch and Adele, while America presents… Lana Del Rey… Alex Winston is a breath of fresh air from this side of the Atlantic (Detroit, to be exact).

Winston starts off her album with “Fire Ant,” a gypsy-pop song infused with confident and fighting lyrics like, “goddamn you’re back again, try to crawl under my skin, if future fire feeds the flame, cause ants like you are all the same.” Then, she seems to make a 180 with her second track, “Velvet Elvis,” a love song to a velvet Elvis painting—but no. Though light key cords signal a much more adorable, sweet-little-thing tone, Winston can’t help but put her crass spin on the cutesy moment singing, “kill the bitch who bats an eye… at Elvis.”

She’s not trying to be your girl next-door guitarist or trying to blow your mind with her voice or trying to creep you out with how different she is. Though she could be any one of those things, she has instead blended it all together and ahhhh — breath.of.fresh.air. Even more, Winston’s not just a singer/songwriter, she’s got a huge band community backing her, a lá Edward Sharpe.

Especially enlightening about Alex Winston’s King Con is that this is not an album about a love interest. Sure, there are touches of infatuation with songs hitting on topics like having a one-night stand (“Host”) and being in a polygamous relationship (“Sister Wife”), but it’s mostly an album about random things in life from moving trains (“Locomotive”) to ignoring societal responsibilities (“Medicine”) to bodily organs (“Guts”). And even though it’s focused on such oddities, it’s not emotionally vapid at all.

From start to finish (and when I say finish I mean it because the closer on this album, “The Fold” is a stand-out full of danceable builds and uplifting harmonies) King Con has more than lived up to last year’s awesome downloads and this LP certainly makes Alex Winston a 2012 musical must-hear.