"Afraid Of Heights" by Wavves 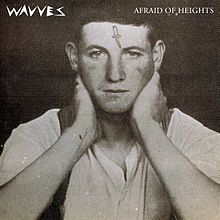 Nathan Williams remains confident that pop punk is Wavves” major selling point. Those pining for MTV”s Alternative Nation will find plenty of appetizing morsels on Afraid of Heights. “Sail To The Sun” and “Lunge Forward” are flail-worthy beach parties decorated with surging riffs and

high-pitched squalls. Later, “Gimme A Knife” shames them both by replacing moony pontification with a caustic leap of faith: “I loved you Jesus, you raped the world.” Vigorous nü-grunge prototypes abound, “Demon To Lean On” and “That”s On Me” being the best of the bunch. However, the focus on angst and alternating dynamics means sacrificing more intriguing inclinations.

Perhaps Williams got prog-tronica out of his system recording a few dozen tracks as Sweet Valley. Lone experimental refreshment “Hi Getting Hi” reaches back to Wavves” distorted origin and cuts it with an 808, like industrial gone crunk. The power ballad gets several murky makeovers with “I Can”t Dream” hitting the mark more effectively than “Dog” and “Everything Is viagra canada My Fault.” Afraid of Heights is intentionally less polished than King Of The Beach, their superior yet unsuccessful “90s rock dinosaur audition piece. This time around, the grime sounds less genuine than the gloss.