FROM THE NEWS NEST: Sleepytime Gorilla Museum Calls It Quits 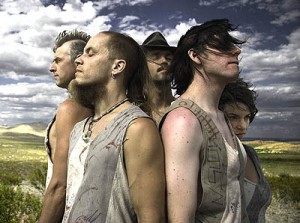 The museum is closing and officially ending an era in Bay Area music. Oakland DIY avant garde rockers Sleepytime Gorilla Museum are slated to play their last three shows next month, with the very last booked at SF’s Independent on April 10. Sleepytime formed in 1999 with founding members and Idiot Flesh alums Nils Frykdahl and Dan Rathbun along with Carla Kihlstedt. The band has since released three full-length albums showcasing their affinity for brooding tonality, odd timing, and crashing percussion care of an arsenal of home-made instruments. And a wood-wind recorder, can’t forget that little guy. Sleepytime is scheduled to finish and release a final album and a live DVD highlighting their most notable shows of the past six years. A short film by the band entitled The Last Human Being is also due to shoot final scenes in August of this year, however, a release date for that is as of yet unannounced.

For further updates and release dates, stay tuned to Sleepytime’s Facebook at facebook.com/sleepytimegorillamuseum.