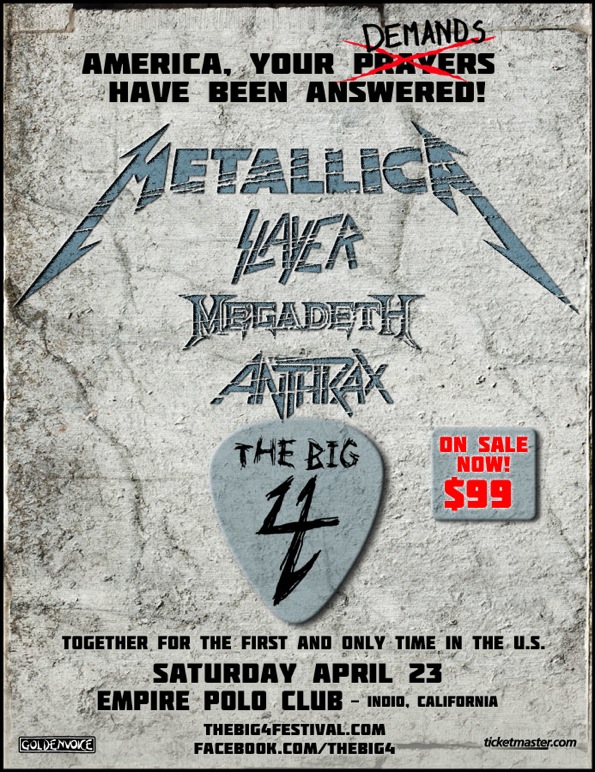 The history of rock music can be tracked by milestones left behind by epic rock concerts. Whether it was Steve Wozniak’s US Festival in 1983, or the first Lollapalooza in 1991 (whose line up included Jane’s Addiction, Nine Inch Nails, and Ice-T with Body Count), or even May of 2006 when Daft Punk played in the brutal heat of Coachella. These moments of time are defined by those who were there and those who wish they were.

On April 23rd, one week after the Coachella Music Festival, Goldenvoice promotions will fill the Empire Polo Grounds in Indio with a crowd who will claim their spot in history by witnessing The Big 4. As the earth begins to rumble, residents of the Coachella Valley who may have thought The Big 4 was some sort of summit for the powerful will quickly learn the power is the sound of Anthrax, Megadeth, Metallica & Slayer sharing the stage for what is supposed to be the one and only North American stop for the bands.

There is no doubt the success of this event will spawn a North American leg of a tour that originally began in Europe in 2009. The difference between attending on April 23rd or some future unannounced date is some will claim, I was there, and you were not.