PREVIEW: Sell The Heart Records Showcase @ Bottom of the Hill 8/3/11 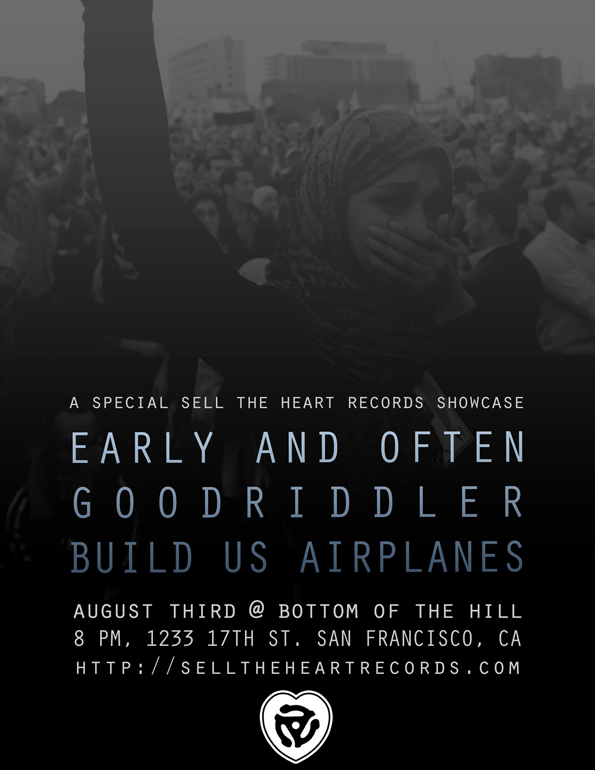 Who: Sell The Heart Records showcase: Early and Often, Goodriddler, and Build Us Airplanes
Where: Bottom of the Hill
When: 9PM Wednesday, August 3, 2011

Early and Often, Goodriddler, and Build Us Airplanes form an eclectic lineup. Sell The Heart Records will be showcasing the three bands, Wednesday night, August 3rd, at Bottom of the Hill.

Build Us Airplanes is a rock band infused with punk and prog sensibilities. The song I connect with the most is the folk ballad “Pale Ale,” which is influenced by Modest Mouse. This four-piece hails from Vacaville, CA. They are promoting their latest record, The Pale Ale EP.

Goodriddler is the solo digital soundscape project of a very pleasant gentleman named Nicholas Wolch. Nick’s musical process has several layers. Prior to performing, he writes and records complicated electronic compositions on his computer. Then on the stage with his MacBook Pro at his side, Nick puts on a highly energized live drum performance. Occasionally he’ll sheath his drumsticks and jam out on a ukulele or piano. His strongest asset is his voice. You’ve got to hear this cat sing!

Early and Often is promoting their EP Present No Fiction, Fear No Tense that was released in June 2011 by Sell The Heart Records. The Sacramento-based four-piece plays an experimental post-rock (rock music for the sake of auditory art, and not so much for the sake of a conventional song). The music is characterized by long, drawn out tones produced vocally, alongside bass, drums, piano and guitar arranged in complementary rhythmic patterns. The songs generally have loud sections separated by softer melodic sections. These are sometimes followed by distorted electric guitars cranked to a level that could blow your father’s toupee clear across the room. The hook for me is when singer Jeff Wright sings. This kid has got some serious soul. When he opens his mouth, an incredible energy billows forth. This concert will be the second of a six-city tour through the northwest. The quartet will be headlining the night and celebrating Wright’s 21st birthday.