Outside Lands 2015: Top Picks from the Nest 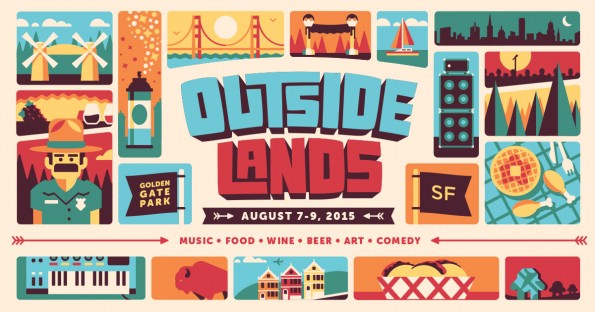 The crown jewel of the San Francisco Bay Area’s music festivals returns August 7th – 9th to Golden Gate Park. The release of Outside Lands’ three-day lineup always stirs up fervent debate over the quality of the lineup itself, comparisons between lineups of Outside Lands past, and lamenting over set time conflicts between two or more bands on different stages. Inevitably, the headlining bands above-the-fold seem to draw a dividing line in the dirt with each side respectively championing “LOVE IT!” or “What were they thinking?!” For us, it’s the bands below-the-fold that really get us going – maybe there are some bands in the lineup that you’ve been dying to see but haven’t had the chance yet or maybe there are a few bands you’d be reluctant to see play solo but would check out during the 3-day festival.

As you may (or may not) know, the grounds in Golden Gate Park for Outside Lands are huge. Now just imagine it packed with tens of thousands of people rushing around trying to get all the way from the Lands End stage to the Twin Peaks stage. YIKES! Planning your daily schedule for each day of the festival can be critical, so to help you start formulating said schedule, we are here to give you a few inside pointers on bands you want to put on your Outside Lands radar.

Here are our Outside Lands 2015 Top Picks from the Nest:

Friday, August 7th: Outside Lands starts out strong on Day 1, but beware of lots of potential set time conflicts (we’ll know more for sure once the set times are released closer to the festival)

Speedy Ortiz: Don’t be one of those people who shows up at 4 o’clock each day of the festival. If you do, you’re going to miss out on some serious discovery opportunities, like East Coasters, Speedy Ortiz. Singer Sadie Dupuis will reward early birds with some serious energy to get your Friday started off right.

Leon Bridges: If you were paying any attention to your various social media apps during SXSW this year, chances are you would have seen a feed full of references to this guy. This Texas native impressed a whole lot of people with his amazing gospel and soul roots in his home state this spring and from our perspective will likely have the undercard set of the day.

Broods: New Zealand’s electro-pop darlings, Broods, may be one of those bands that you’ve been meaning to see but just haven’t had the chance yet. The sibling duo of Georgia and Caleb Nott made their way through the Bay Area last year in support of their 2014 debut release Evergreen. Their set will get your blood pumping early in the day from all the dancing you’ll be doing.

Lake Street Dive: We told you guys about Lake Street Dive last year (read here) and now’s your chance to catch them on Friday. Singer Rachel Price will absolutely knock your socks off – she has an effortlessly powerful set of pipes that are equal parts cool and sexy.

Chet Faker: Oh Chet and that beard. More likely than not, the Chet Faker set will be packed with people. He impressed festival goers during Treasure Island last year with his smooth R&B-inspired crooning and Blackstreet covers. Cozy on up to your best guy or best gal for one (you can thank us later).

First Aid Kit: Sweden’s First Aid Kit are an absolute treat. Sisters Johanna and Klara Söderberg know how to stir up all the feels with their amazing vocals and songwriting. If you haven’t caught them live yet, this might be a good set to relax at with a nice glass of wine from Wine Lands.

D’Angelo vs. St. Vincent: We are really, really hoping that the Friday schedule doesn’t make festival goers choose between these two sets (Please Ranger Dave, don’t do this to us!) but to our big owl eyes, the lineup suggests that there may be a set time conflict between Annie Clark and D’Angelo. UH OH!

Saturday, August 8th: On Day 2, your legs and back may be a little sore, so we understand if you need an extra hour or two to get yourself moving.

Twin Peaks: Be prepared to have Chicago’s Twin Peaks rock your world. We first discovered these dudes at a festival in Los Angeles last year following the release of Wild Onion. If you’re in the mood to get rowdy, push on up towards the front of the stage and get that Saturday blood flowing.

Unknown Mortal Orchestra: 2015 has been a seemingly quiet year for UMO, despite the release of the band’s third studio album Multi-Love earlier this year. The band pivoted away from the sonically distorted world of psych-rock towards the bright light realm of synth-pop on this album. The result? A pretty feel good album from guys who know how to slay it in a number of different ways.

Django Django: Britain’s Django Django has always appealed to the nest since their debut self-titled album hit the streets in 2012. Now, the band’s 2015 release Born Under Saturn has kept our love for them going strong with its quirk-art aesthetic and probably one of the best album covers so far this year (is that an orange wedge or a Cheese It?).

Laura Marling: British songstress Laura Marling will make you fall in love with her on Saturday. All you have to do is stand there, watch, and listen. The singer/songwriter’s newest work Short Movie has her expanding her horizons as it marks the first time Marling sat in the role of producer and also the first time she’s recorded songs on an electric guitar.

Angus & Julia Stone: You may already know the Australian brother and sister duo of Angus & Julia Stone after having their songs track various television shows and films. What you may not know is their remarkable story of reuniting to continue their musical journey together after being apart on hiatus for two years. The man credited with helping Angus and Julia find their way back to each other? None other than Rick fucking Rubin. Yeah. Check them out.

Milky Chance: If you haven’t heard their song “Stolen Dance” you’ve been living under a rock. German electro-folk (not an oxymoron) duo Milky Chance has been launched onto the American music scene since their debut album Sadnecessary released stateside in 2014. Their set is going to be all about the love mixed in with a laid back vibe combined with a pair of excited and appreciative guys…and that makes us pretty excited to see them.

Tame Impala: Anytime Tame Impala does anything, it must wind up on a “most anticipated” list somewhere. New album? Tour? Going to the grocery store? The Australia psych band’s album Currents was probably one of the most anticipated releases of 2015 so why should their set on Saturday at Outside Lands be any different? If they showed up at Whole Foods to pick up some snacks, it would undoubtedly be the “best grocery store sighting of 2015.” We’re ready for all of it.

Sunday, August 9th: The final day of Outside Lands! You’re exhausted! And your back hurts! Come on guys…IT’S TIME TO RALLY FOR DAY 3.

Metz: Feeling a little tired on a Sunday afternoon? No worries. Just wander over to whichever stage Toronto’s Metz is playing at and be prepared to have the most pleasant yet ear jarring wake up call you’ve ever experienced. The band’s hard-hitting punk intensity won’t be everyone’s cup of tea and is not for the faint-of-heart, but if you do give these guys a go, you will not be disappointed. Just be sure to wear your ear plugs, kiddos.

GIVERS: If you’d rather start your day with a little less…intensity, we recommend GIVERS. It’s been a while since we’ve heard new music from this Louisiana band, but what we do know of them from their 2011 album In Light, we like. Look for sunny melodies, group harmonized vocals, and drums…lots of drums.

Dan Deacon: If you decide to really sleep in after Saturday’s festivities, definitely start your day out and get your body moving with Dan Deacon. The man with a plan should fit in soundly between GIVERS and SZA, and playing along with Deacon’s charming crowd participation “ritual” will be a fitting way to spend a memorable moment on Sunday.

SZA: You want realness? Check out SZA, aka Solana Rowe on Sunday. The singer/songwriter will hit you right in the gut with her amazing vocals delivered from a place of honesty full of gritty emotion. You’re probably going to need a drink or two after her set just to take the edge off.

St. Paul and the Broken Bones: When we first heard “Call Me,” the first single off St. Paul and the Broken Bones’ album Half the City, we were absolutely blown away by the rich buttery tones of singer Paul Janeway’s voice. His on-stage performance only adds to the amazement. The guy doesn’t know anything other than giving it his all, even if it means slipping and falling while belting out some soul-filling tunes. This set is going to be pretty packed, so you’re going to want to make your move to the stage early to grab a spot.

Caribou vs. Hot Chip: Sunday evening could bring about another tough decision. Caribou? Or Hot Chip? In the event that there isn’t a schedule conflict, we definitely recommend seeing both (duh). But in the event that you need to make a down to the wire decision, Caribou slightly wins this battle by a tiny little fraction for us. We just can’t get enough of Our Love.

Whatever bands you decide to see at this year’s Outside Lands, we hope that you have an amazing festival experience at one of the best festivals of the summer. Be good to each other out there kiddos.