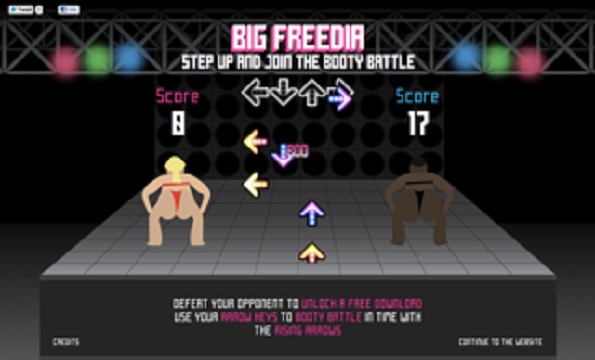 Move over Mario and Luigi because Big Freedia and her Booty Battle Video Game are shakin’ their way across the USA. On Monday, April 2nd, New Orleans Queen of Bounce, Big Freedia, along with the Chicago-based marketing company and game creators, Eyes & Ears Entertainment, launched the Big Freedia Booty Battle interactive video game. The video game with all the booty bouncing and arrow key strokin’ you can endure is available on BigFreedia.com and music/culture magazine Vice.com. Shake your character of choice’s booty in a booty battle and the winner gets a free download of a Big Freedia track. Winning scores can also be tweeted out over the Twitterverse.

But oh no, the fun does not stop there. Did someone say live booty shaking? In conjunction with the release of the Big Freedia Booty Battle video game, Big Freedia and her Divas are bringing their booty shaking skills on the 2012 Booty Whop Tour, shaking their asses all over the US, and trust us, you won’t want to miss this bootylicious display. It’s known to bring out the sweaty, booty-shaking freak in anyone willing to party all night long. Checkout the video game online and definitely hit up one of the live shows listed below! Better bring you’re A game or at least your ass to shake.