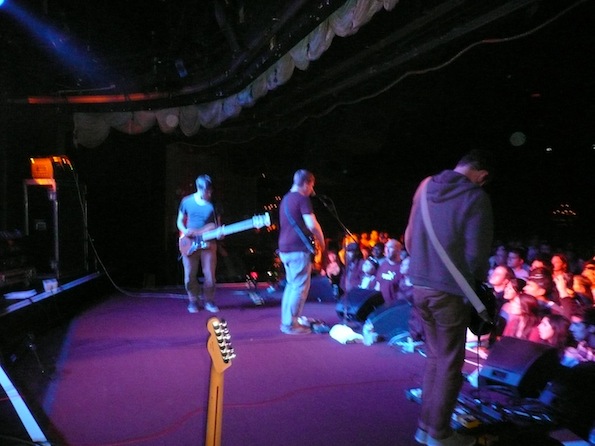 These Scots nearly packed the house at Bimbo’s 365 on a rainy Friday night in SF. Opening act Bear Hands had some good songs and the general vibe for the night was great leading up to the closer.

Songs from the new album In the Pit of the Stomach sounded good, but they lacked the anthemic punch from the band’s debut, These Four Walls. The place was absolutely feverish over “Quiet Little Voices” which had the audience yelling the “oh, oh, oh” parts at the top of their lungs. The band has grown musically since their last stop in the Bay; they’ve extended their tracks out, focusing on the non-vocal elements.

The triumvirate of awesomeness on These Four Walls had to be stretched out and strategically placed, otherwise Bimbo’s may have very well exploded. “Roll Up Your Sleeves” started the momentum with its grizzly punk riffs, “Ships With Holes” had the crowd bouncing and by the time the band wisely closed without an encore to “It’s Thunder and It’s Lightning,” it was goosebump-inducing as lead singer Adam Thompson spiraled into guitar chaos and he screamed “your body, it’s black and blue,” and the crowd fist punched the air.

The band has cemented their reputation as a live powerhouse, and my good friend–who was introduced to them a few hours before the show–was so stoked on the band that he bought both records and a t-shirt after the show at the merch table.