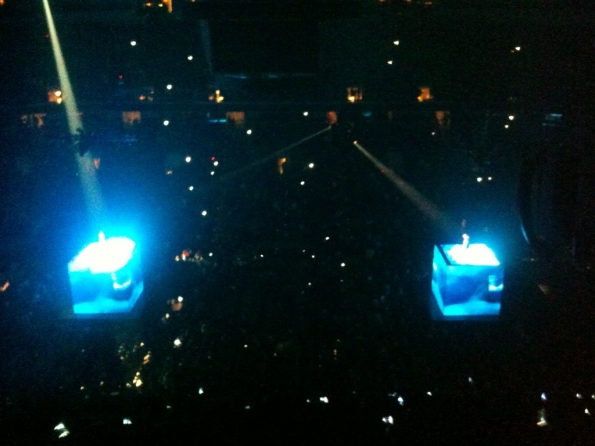 Colossal? Mammoth? Monstrous? They all fit, but a two and a half hour show with no fluff, no filler, and no opening act with the two biggest artists in the world? Epic, dudes.

The show was pushed back from 7:30pm to 9:15pm. Our entertainers were prompt and the audience wasn’t ready. “H.A.M” started the set with Kanye and Jay on respective stages going back and forth, trading verses. The floor of the Pavilion had people scattered about. Their stages rose forty feet in the air with huge high definition screens of barking Dobermans, aquatic scenes, and other nature shots lining the four walls of the climbing stages. I was a little nervous that the Bay was not properly representing and we would have a half full show. After “H.A.M,” an American flag appeared on the main screen (see video below), flowing in the wind as Otis Redding’s “Try a little Tenderness” played in the background which eventually broke into “Otis.” The crowd sang the sample at the top of their lungs and it was chill-inducing. By the time they hit the stage — together now– the place was packed and bouncing in unison.

The energy and charisma from both performers was incredible. I felt Jay got a better reaction from the fans, but my others felt Kanye did. They performed songs individually from their respective catalogs with Jay killing “Public Service Announcement” and -Ye coming back with the equally bangin’ “Can’t Tell Me Nothing.” I was curious to see if any of 808’s and Heartbreak would make the set. He did “Runaway,” and went into “Heartless.” It’s not a typical arena jam, but it set a different mood, and the crowd seemed to appreciate it. Red lasers lit up the blackness with no spotlight on Kanye who was dressed in leather pants, his signature Nike sneakers (Air Yeezy’s), and a leather kilt. Jay countered with “On To The Next One” and the show stealing “I Just Wanna Love You.” They came back together to play “Diamonds Are Forever” and “Run this Town” before getting into songs from The Throne.

“No Church In The Wild” was under-appreciated; “Niggas In Paris” was certainly not. They played it three times. Three. Straight. Times. It
was a ballsy move. And while it would have been nice to hear “Illest Motherfucker Alive,” or “Primetime,” it was the right call. People filed out of the show with smiles on their faces with tons of energy, talking to their friends and trying to remember all of the highlights. Epic!