LIVE REVIEW: The Vaccines and Arctic Monkeys @ The Independent, SF 8/12/11 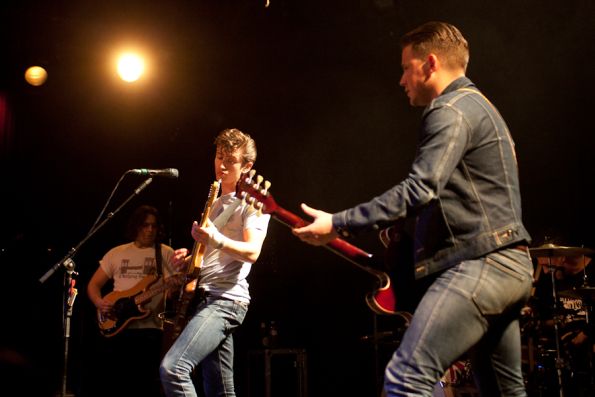 Listen my owlets and you shall hear
Of one late night show at OSL this year
One if by land, and two if by sea
To warn as the Brits descend to take the Indy 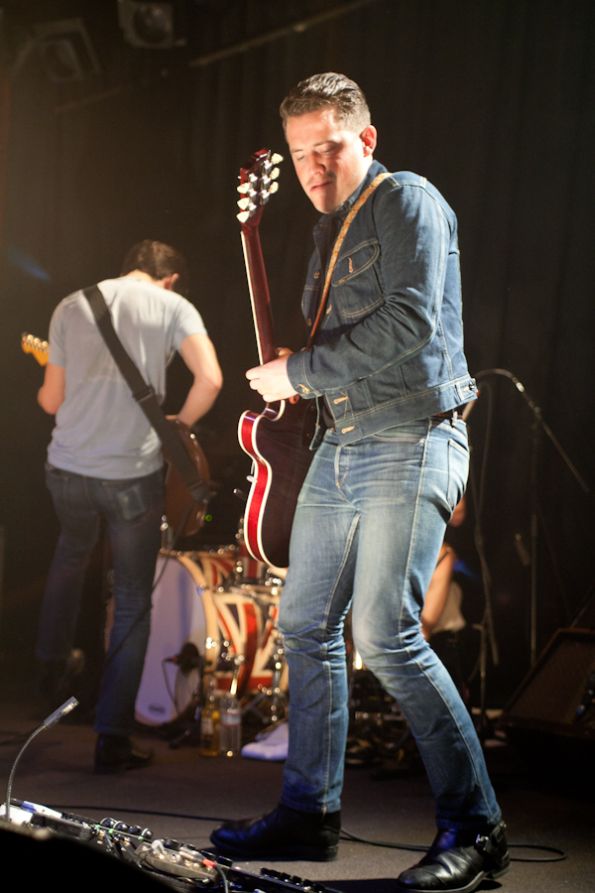 The Outside Lands night show pairing of the breakout darlings and the young veterans was every anglophile’s wet dream. The sold out show lured festival attendees out of the park away from Phish and the Shins and back to the city streets for The Vaccines and Arctic Monkeys. 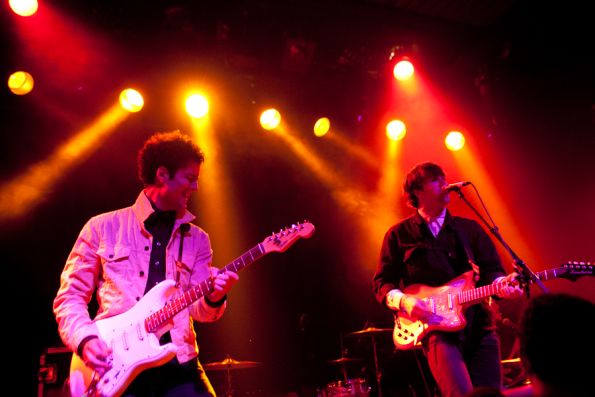 Even before the release of What Did You Expect From the Vaccines?, the British media heralded the band’s debut album as the return of the of the great British guitar band. Did British guitar bands somehow manage to unknowingly disappear into the mist like Nessie in the past decade? Early praise hyping the London foursome gave new meaning to the the album’s title and ultimately ended up being a double-edged sword. 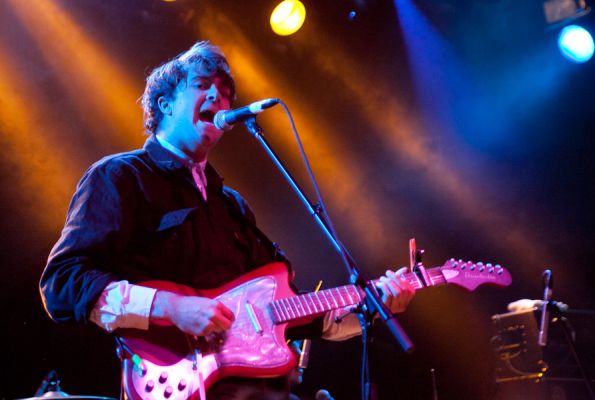 The Vaccines are not the messiahs of the British music scene, just ask them, and placing such weight on their shoulders is probably the greatest disservice of all. Though not terribly earth shattering or visually captivating, The Vaccines delivered a solid rhythm heavy show grounded by drummer Pete Robertson and bassist Árni Hjörvar. 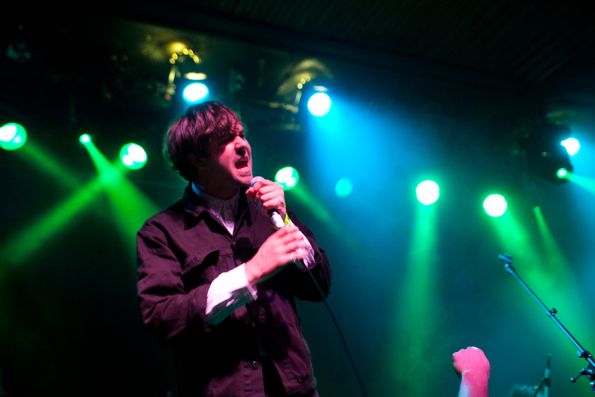 Robertson commonly cites Dave Grohl as a key influence, and though not immediately apparent on the album, Robertson is an equally heavy live drummer relentlessly pounding out “Wreckin’ Bar (Ra Ra Ra)” on the snare and hi-hat in just over a minute. Justin Young draws appropriate comparisons to Morrissey or The Stills‘ Tim Fletcher with velvety brooding vocals over Hjörvar’s moody bass lines on “A Lack of Understanding.” 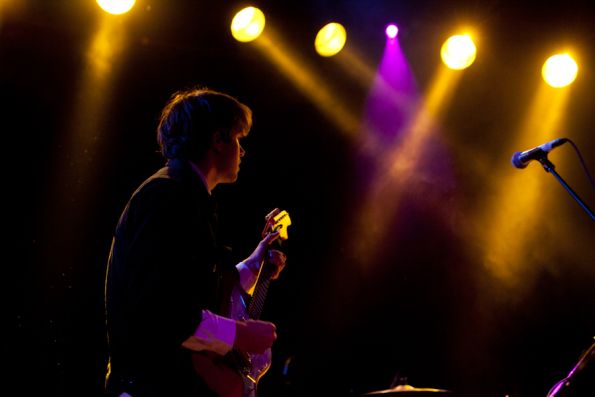 The set hit its apex on “Wetsuit” with its slower pace and dramatic anthem-like quality. Though “Wetsuit” is more atypical of The Vaccines‘ aesthetic, Young’s easy vocal delivery and Robertson’s core jolting performance on the drums were consistent throughout and provided the common thread tying the short the ten track set together in a cohesive package. 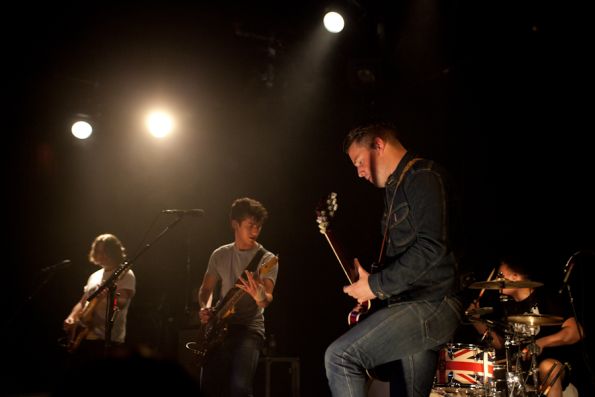 At about 11:30pm, the Arctic Monkeys invaded the Independent with “American Woman” tracking their entrance onto the stage. With the recent release of the band’s fourth album, I was eager to see how much of the set list would incorporate tracks off Suck It and See as this album is not the quintessential Arctic Monkeys circa 2006. 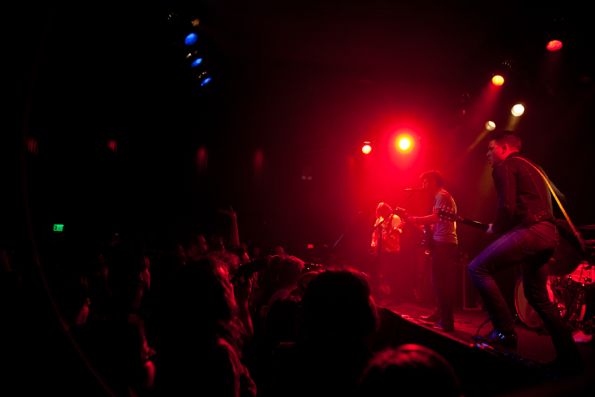 When a band builds up a four album catalog over the course of five years, composing a twenty-one song set list can become a balancing act between old crowd pleasers and newer material, particularly where a band’s beloved sound experiences an abrupt shift to something less familiar.  Though the set list wound up being an exercise in fractions divvied up relatively equally among the albums, it was clear that tracks off Whatever People Say I Am, That’s What I’m Not and Favourite Worst Nightmare were the crowd favorites and understandably so. 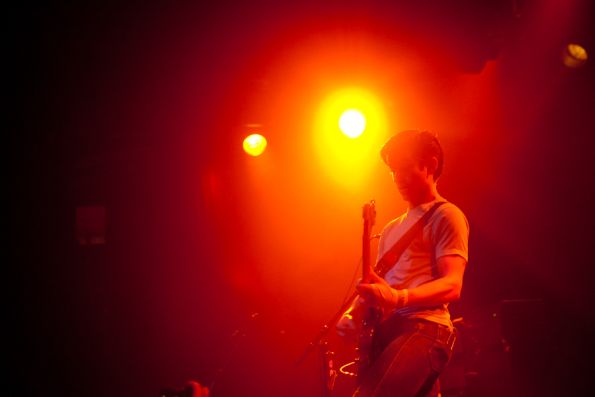 Since stepping onto the scene, the Arctic Monkeys‘ distinct sound beckons something innate within, something primitive and sinister that dwells in the underbelly of our subconscious. Nothing personified this notion more than the quirky riffs on “This House is a Circus,” frenetic growling guitars on “Still Take You Home,” trademark tempo changes, syncopated drums, and false endings on “The View From the Afternoon,” and Alex Turner’s staccato vocals and wordsmithing on “Teddy Picker.”

About six songs off the lighter pop-infused Suck It and See were peppered into the mix, but it was clear that “Library Pictures,” “Brick by Brick,” and “Don’t Sit Down ‘Cause I’ve Moved Your Chair” folded into the list the most seamlessly due to their sonic similarities to earlier albums. Friday night of Outside Lands satiated our little anglophile appetites and The Vaccines and Arctic Monkeys collectively proved that great British guitar bands have never strayed off the radar.