For the first time since the formation of the partnership between Intel and Vice, The Creators Project found a temporary home at San Francisco’s historic Fort Mason Center for a weekend-long exhibition of mind-blowing installations, film screenings, and musical performances. Think Burning Man for multimedia technology-loving hipsters. We began the day taking in the amazing sights at Fort Mason. 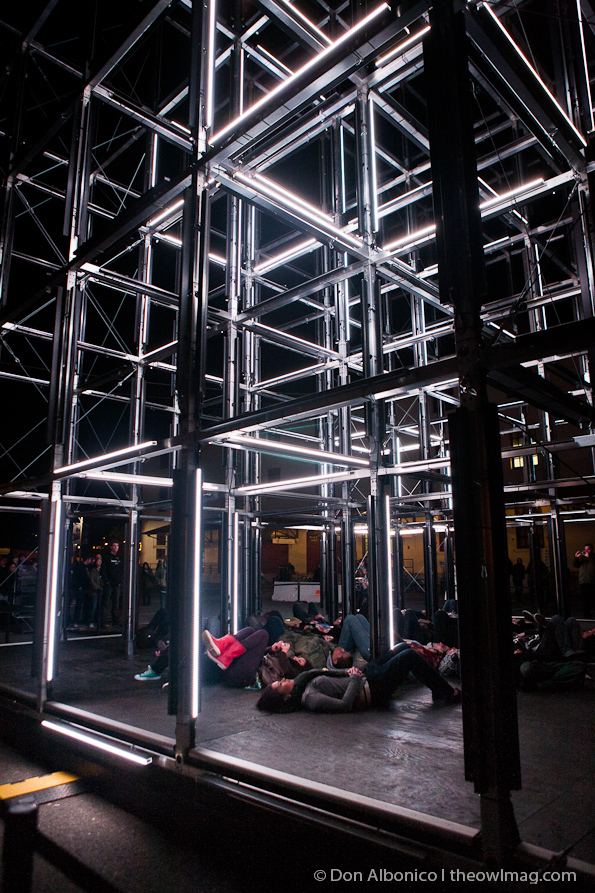 United Visual Artists “Origin”
A giant 40 foot by 40 foot cube latticed with metal and lights greeted everyone with a choreographed light display to a buzzing musical score composed by Scanner. The project, titled “Origin” created by United Visual Artists, is the largest project UVA has ever been commissioned to build. The awe-inspiring piece had festival-goers laying down inside the display for an up close and personal experience. 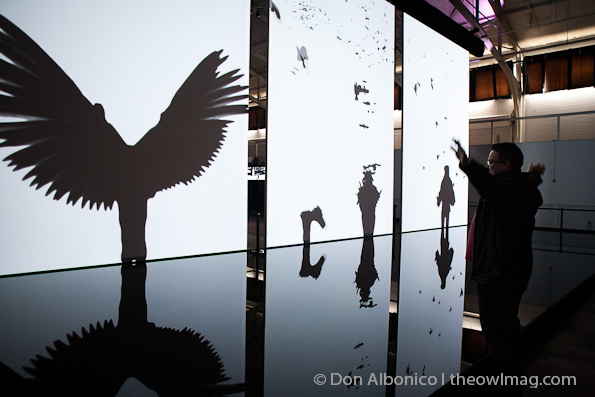 Chris Milk “The Treachery of Sanctuary”
Chris Milk is a familiar friend of The Creators Project and frequently collaborates with Arcade Fire on visual media projects. In 2011, Arcade Fire approached Milk and asked him to create a visually inspiring piece of work to accompany the band’s performance of “Wake Up” at Coachella. Remember the hundreds of LED-lit balls that dropped during the performance? That was the brain child of Chris Milk. This past weekend Milk debuted his three-panel interactive installation, titled “The Treachery of Sanctuary.” The piece responds to human movement against 25 foot screens. Depending on how one moves, various experiences centering around the theme of flight are projected. 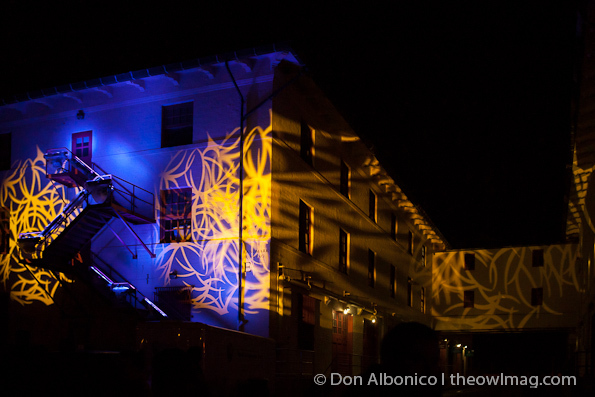 The Creators Project not only provides a platform for visual artists, but in its short three year existence, the Project also delves into the world of music innovation. Naturally, the weekend included an impressive lineup of bands consisting of both relative newcomers and envelope-pushing veterans. 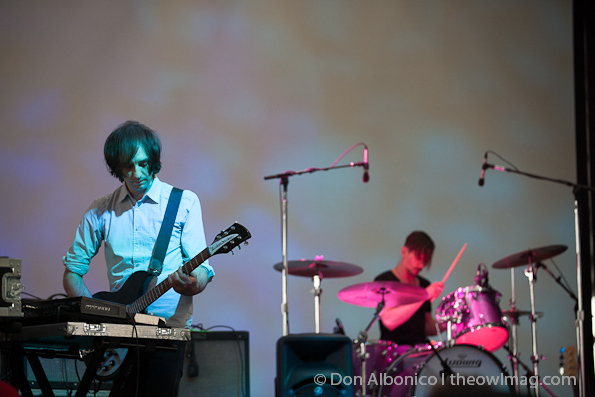 The Hundred in the Hands
New York City’s The Hundred in the Hands kicked off the musical portion of the weekend with a short-but-fresh electropop set which got the crowd going as they trickled into the music hall from the cold. Singer Eleanore Everdell’s vocals are attention-grabbing with a quality similar to Grimes‘ Claire Boucher. The Hundred in the Hands left a positive first impression as a solid synth-driven, beat heavy indie band. Fans of Sleigh Bells and Phantogram should check out their self-titled debut album which released in 2010. 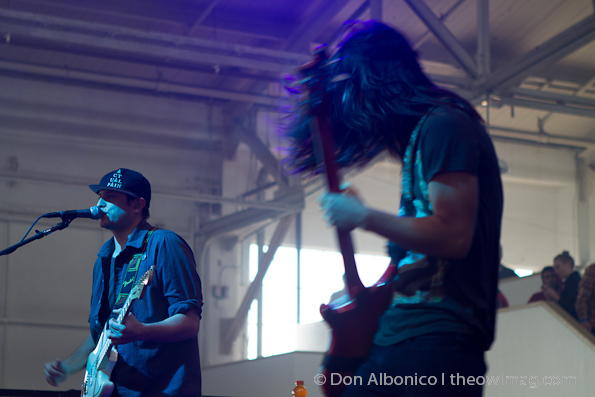 HEALTH
HEALTH are about to embark on their own journey into the world of visual media. The Los Angeles-based noise rock band completed recording the musical score for Rockstar Games’ Max Payne 3, set to release on May 15th. A few minutes into HEALTH‘s set the decibel level made my throat feel like it was going to erupt from my neck. The core jolting drums and bass made every molecule in that space quiver from the reverb off the subwoofers.

John Famiglietti aggressively flung his long locks while playing the bass and Jupiter Keyes crouched next to him alternating between wailing on a floor tom and slamming his hands down on the synth. If I had to choose one band to score my death scene of being devoured by walkers during the zombie apocalypse, without hesitation, I would choose HEALTH. HEALTH‘s progressive approach to writing twisted and distorted musical compositions is both abrasive and exceedingly beautiful. 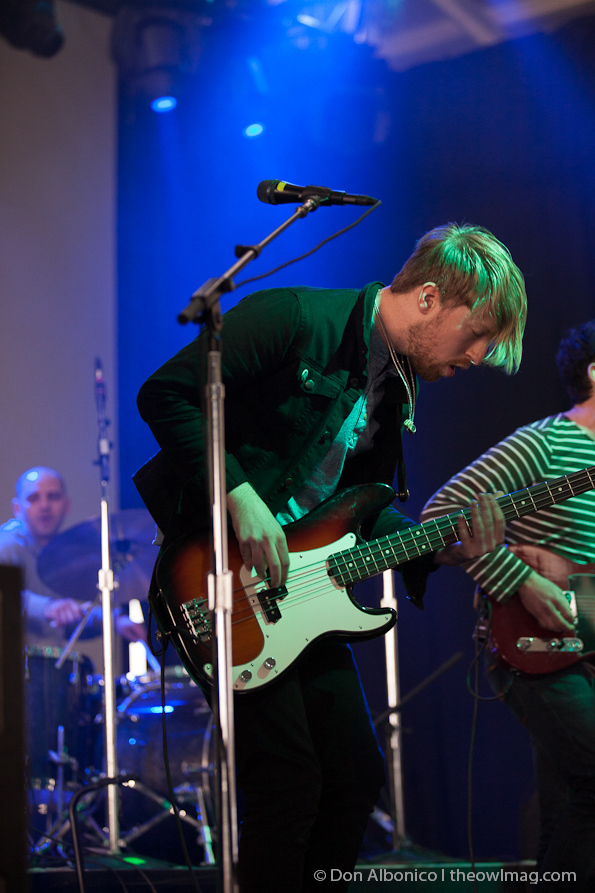 The Antlers
It’s no secret that The Owl Mag loves The Antlers. The band’s fourth full-length album Burst Apart made our “Best of 2011 Honorable Mentions” list. The Antlers are one of those bands who are able to effortlessly transcend their own album sound through their live performance. Peter Silberman’s falsetto on “French Exit” was piercing yet silky smooth and witnessing him hit some of those notes without so much of a rasp or crack in his voice sent goose bumps down my arms.

Touring as a four-piece band, The Antlers are a dynamic bunch on stage. Touring bassist Timothy Mislock phantom sang almost all of the songs in the set with just as much heart and emotion as Silberman, though his voice could really only be heard by those in the first few rows. With a few more minutes than expected in their set, The Antlers closed with “Hounds,” another hauntingly beautiful song that showcases Silberman’s vocal range and how it’s used as an additional melodic instrument. Something tells me that The Antlers will get some heavy rotation time in the soundtrack to my life this coming week. 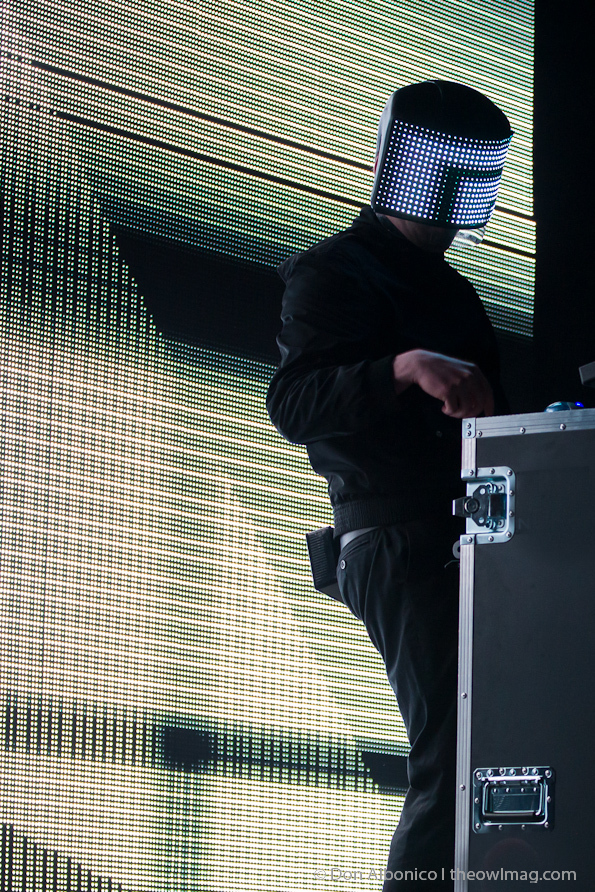 Squarepusher
It’s been seven years since UK-based Tom Jenkinson, better known as Squarepusher, performed in the United States and fifteen years since he’s performed on the West Coast. This weekend Squarepusher debuted his brand new set and accompanying stage performance for the upcoming release of Ufabulum May 15th. Much like experiencing Girl Talk or Deadmau5, to really appreciate Squarepusher you need the full visual and audio sensory experience. The newly-crafted stage performance incorporates geometric LED visuals synchronized to every eardrum-shattering song. Though the hour-long set was a little vertigo-inducing, witnessing Squarepusher‘s newly mastered work combined with the innovation behind the performance made the dizziness entirely worth it. 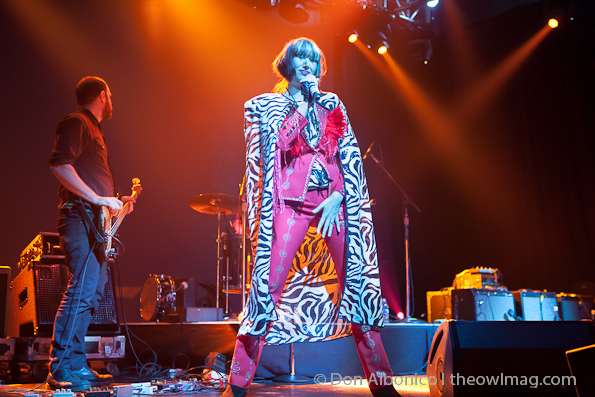 Karen O commanded the crowd dressed in her trademark eccentric threads as she strutted back and forth during the opening performances of “Gold Lion” and “Phenomenon.” The band’s sound continues to be unmistakably raw and edgy, driven by Zinner’s guitar work and creative manipulation of common drum machines, Karen O‘s cunning songwriting, and Brian Chase’s heavy-handed jazz drumming. In the middle of the set, the band debuted some new songs (perhaps new material off an upcoming album?) which felt the most similar to songs off Show Your Bones and performed their cover of The Cramps‘ “Human Fly.” To close their set, the Yeah Yeah Yeahs ended with two of their singles off their 2010 album It’s Blitz, “Zero” and “Heads Will Roll.” The entire warehouse of a few thousand people ended a long day of innovation with some serious dancing into the wee hours of the night.

For more awesome pictures from The Creators Project, click here.