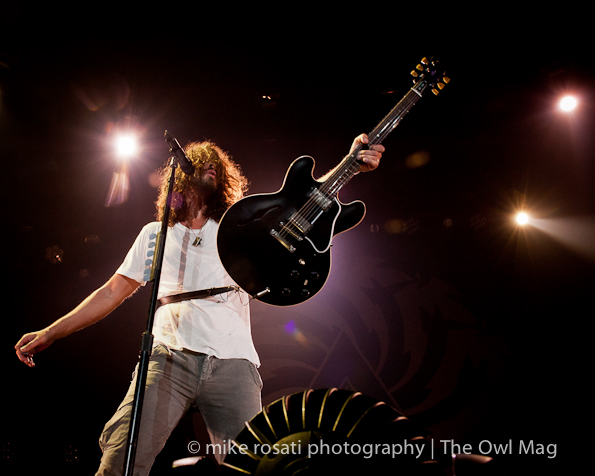 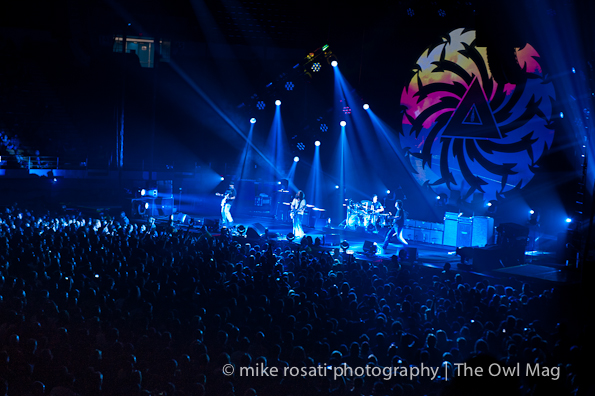 Now that haze of rock idolatry has cleared from my eyes and ears, it’s safe to talk about the Soundgarden show.

Fifteen years is a long ass time between proper gigs (I say ‘proper’ because we’re not counting the Guitar Hero: Warriors of Rock game launch show in September. Yeah, I was there.) and the reunion trail can be a difficult road to hoe. In 1997 Chris Cornell, Ben Shepard, Kim Thayil, and Matt Cameron walked away with unusual quiet for a band so ungodly loud, but they did so with three important things that practically guaranteed a successful return: a high quality catalogue, more good feelings than bad, and public demand. Emphasis on demand because fans were in no way done with the band, having carried a white hot torch for them ever since this thing called Soundgarden blew minds with its fusion of metal, rhythm, and classic rock. Ballers in the game, they were. Even if they never reached the success of, say, Nirvana. But side projects and solo careers be damned; we wanted our Soundgarden back. 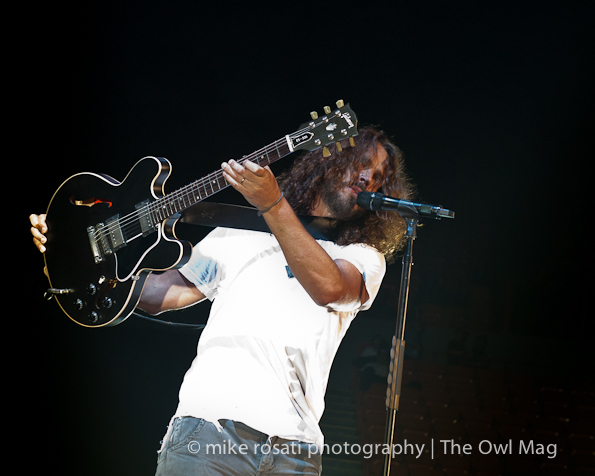 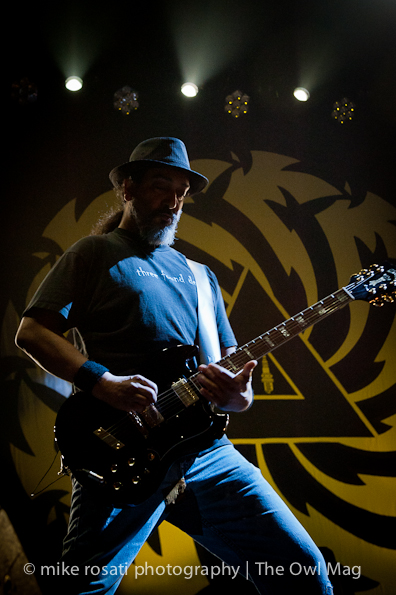 So Friday night at the LA Forum proved to be a welcome retro-fest of the primal, the primitive, and the bombastic sonic heights that Soundgarden became known for. With little to no fuss and promptly at 9:15 p.m. the band took the stage and rapidly fired off “Searching With My Good Eye Open,” the unbelievably metallic, sludgy, and freakish beats of “Gun,” and “Jesus Christ Pose.” It was 1994 all over again for a band made for arena stages, as if they’d never left. 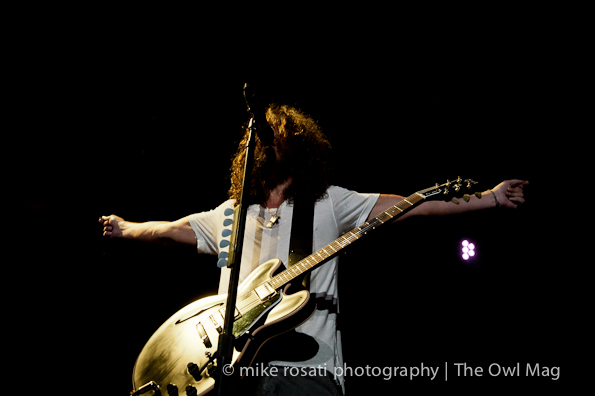 There were many entertaining aspects of the show, from the slam circles in the GA pit to Cornell solving the deficit problem by insisting that churches pay their fair share of taxes to the hella celebs sightings (William Duvall, Juliette Lewis, Foo Fighters, Marilyn Manson, Nancy Wilson, Alain Johannes, Dominic Howard, etc.), to the hair that nearly covered every inch of Cornell’s head. He’s looking mighty grungy of late, but he can work it (see photographic gorgeousness for further). The stunning aspects included Ben Shepard’s aggro bass attack from song one, proving he is still full of fire as he picked a fight with his low-slung guitar all eve. He won. A Zen-like Thayil manned stage left peeling off the winding, slick electric riffs on “Rusty Cage,” “Black Hole Sun,” etc., mostly rooted in place with the occasional urge to wander. Sure Cornell’s godlike wail has changed over the years, as he now sings with equal parts finesse and power, but he can still make the ears bleed and the head shake in awe. Yeah, that was me with mouth wide open, with head shaking during “Beyond The Wheel” as Cornell reached for and perfectly crushed obscene notes seemingly without effort. 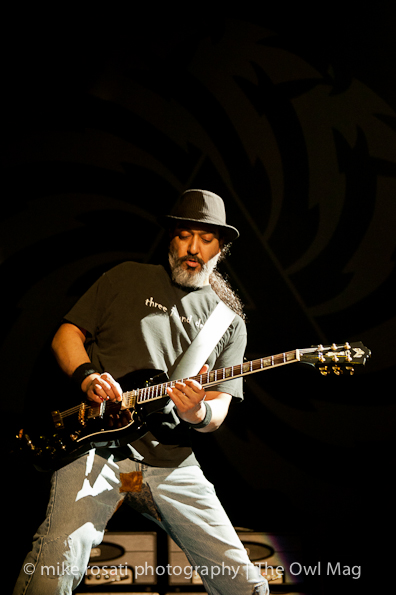 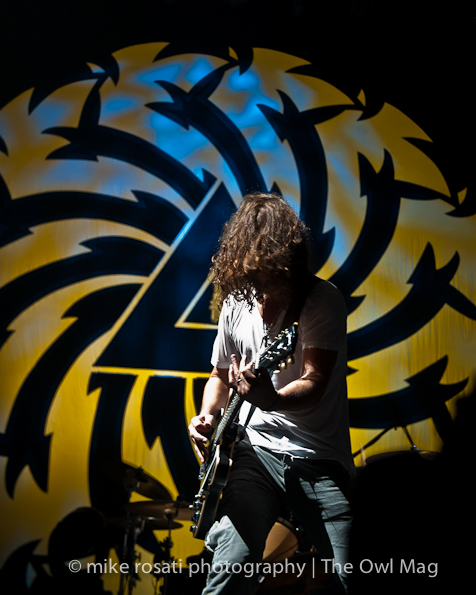 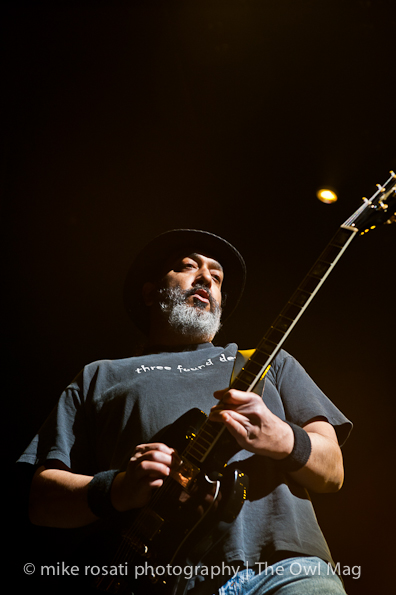 No, I didn’t forget about Cameron; that would be an impossibility, because he’s the keeper of those insane, alt-rhythmic beats that define most every Soundgarden song. Without question, and I dare anyone to say otherwise, he’s one of the most powerful, gifted, and busiest drummers on the planet (oh yes, he’s also the drummer in Pearl Jam), as he’s a dynamic flurry of action and precision and apparently an inner organ massage via every kick of his bass drum is included in the price of a Soundgarden ticket. Awesome.

The fans got full coverage; the show included songs from all five of their albums as well as ”Hunted Down” from the Screaming Life EP and they sang, head banged, and reveled in the tunes that everyone in the room knew and or were fan favorites. Yes, that was Dave Grohl who left his mates at the soundboard and rocked his way through the crowd all the way up to the rail. The deeper Soundgarden cuts like “Ugly Truth” tend to be the lesser refined songs in their catalogue and occasionally went over some heads, but it shows the band’s belief in their material beyond “Black Hole Sun” and “Loud Love,” and I appreciate that. 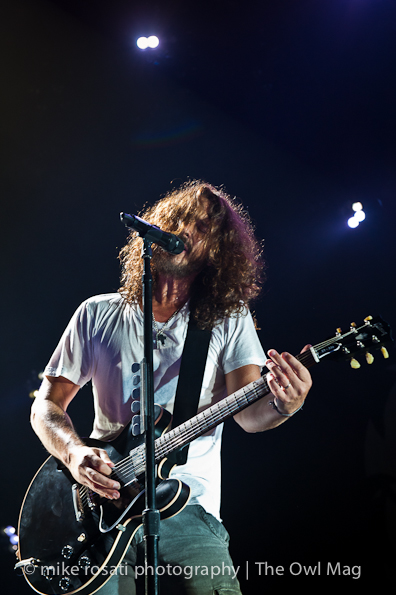 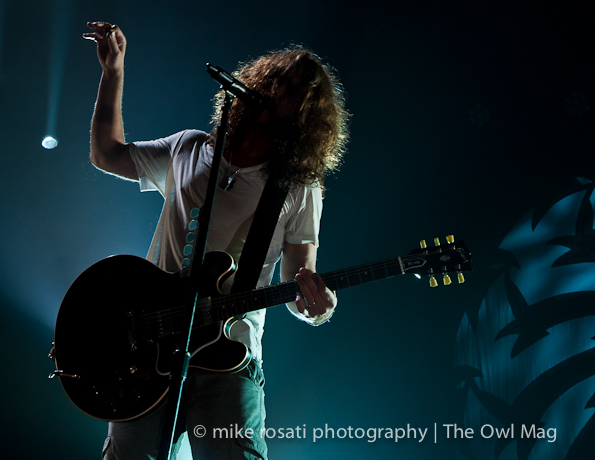 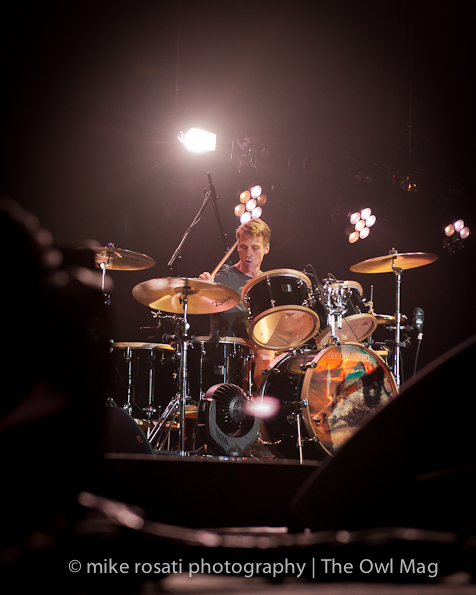 Nothing interfered with the band’s performance as it was near perfect especially with the inclusion of my personal favorite middle finger “My Wave” with Cornell flipping off his “Hate if you want to hate… don’t come over here, piss on my gate. Save it, just keep it off my wave.” The single off moment came with “Burden In My Hand” where the first notes out of Cornell’s mouth sounded pitchy and pretty much stayed that way with the music somewhat dragging ass behind him. But that was all but forgotten as the room exploded again when he introduced Pearl Jam’s Mike McCready who took to guest-shredding on what he recently tweeted was his favorite Soundgarden song, “Superunknown.” Tweeting your favorite tune; is that all it takes to get on stage with Soundgarden? Just asking.

The blinking eye in the backdrop is simultaneously creepy and magnetic and is all you get for special effects at a Soundgarden show because, in truth, they need nothing beyond their ability to punch out their iconic Black Sabbath and Led Zeppelin-inspired sound. And if you could still hear by the encore, “Slaves & Bulldozers” was lowered to a level of nasty that I don’t recall having heard before; Shepard ran deep rivers with bass lines that were almost sexual only to have it all culminate into Shepard and Thayil creating an extended barrage of distortion and feedback with their guitars.

And then Shepard smashed his bass guitar. Yes.

Said to have approximately three albums of new material to work with, Soundgarden supposedly have a new CD on the way; we’ve been waiting for 15 years. We only have the new track “Black Rain” from the Telephantasm compilation as a gauge, but damned if it doesn’t sound like it would’ve been a comfortable fit on Superunknown and that’s a great fucking sign. 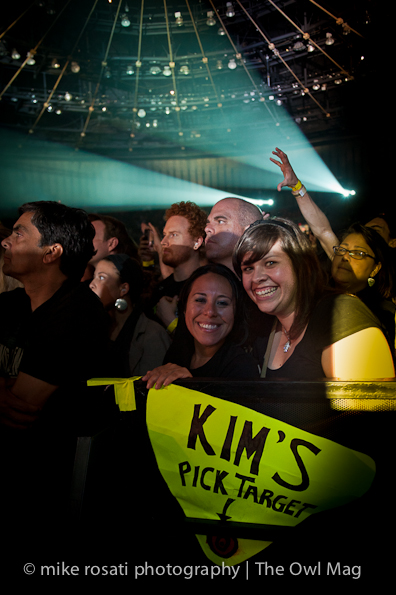 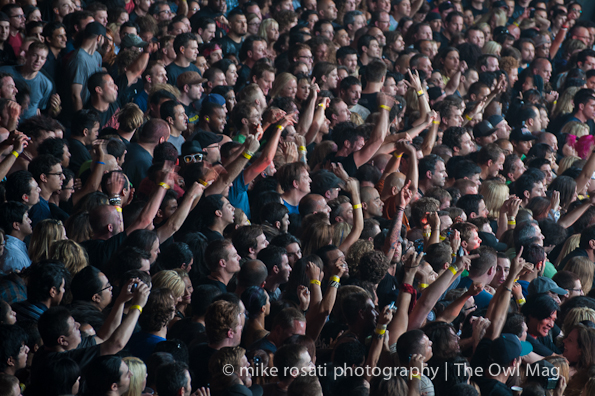 ~ Encore ~
Beyond the Wheel
Hunted Down
Mailman
Slaves & Bulldozers