We got to the Jubilee just in time to catch the beginning of No‘s set on the Sunset Stage. Before they started, one of their guitarists was noodling along on top of the random music the DJ was playing over the PA, giving me hope that they had some serious talent. No did not disappoint. They opened with the dreamy, atmospheric “Another Life.” During the energetic “Big Waves,” lead singer Bradley Carter pointed out our own Managing Editor, Trina Starke, who was dancing along giddily. “Coming Down” was a great song with electronic backbeats, and “Stay With Me” had the strongest 4-part harmonies of their set. 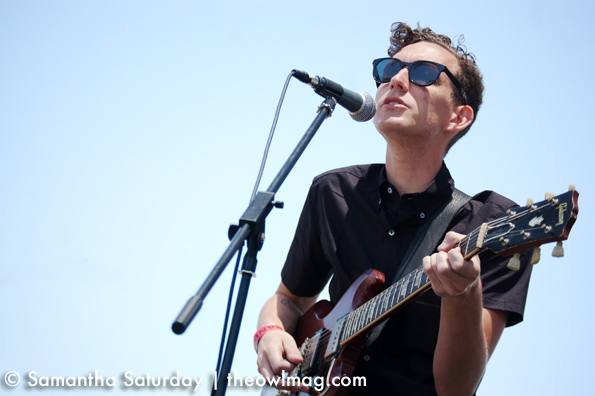 No
Riverside’s Summer Twins were up next. Like their name would suggest, they brought unabashedly sunny tunes that matched Sunday’s warmer weather. “Stars Aligned,” from their recent self-titled LP, was a tropical number with deft lead guitar work perfect for a bright May afternoon. Both lead singer Chelsea Brown and co-guitarist Marcio Rivera had some impressive guitar skills, which really added to their classic pop-rock sound. 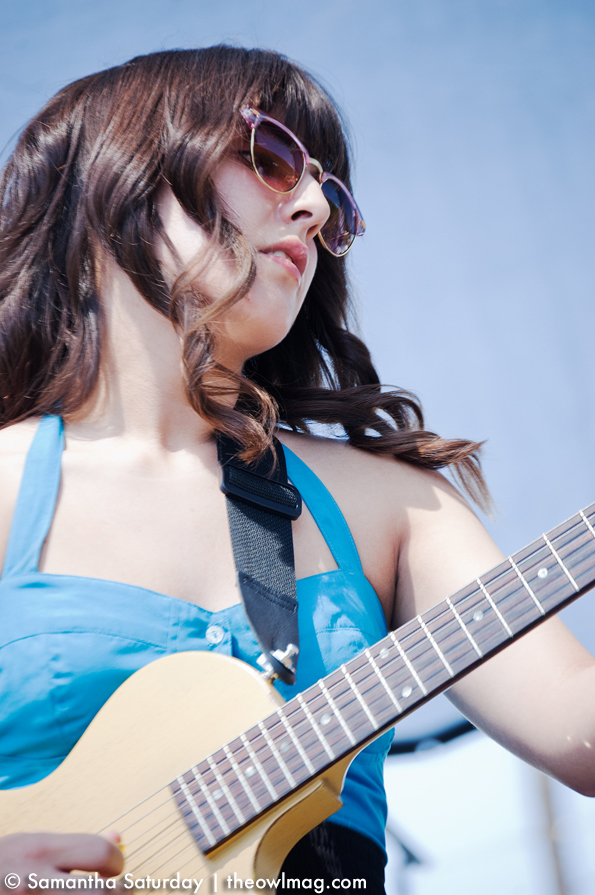 Summer Twins
After Summer Twins, we hoofed it on over to the Hoover Stage to catch Chasing Kings, whom we ended up loving. Their blues-rock was a breath of fresh air. Singer/guitarist Matt Schwartz has a husky voice that sounds great live. Even though Schwartz had to switch guitars, and a festival volunteer was randomly throwing out free t-shirts during their set, they were still an engaging act. They started as a trio, but from “Empathy” onward they were joined by Matt LaRoca on guitar. At that point, Schwartz moved over to electric piano, and they were so in the pocket that bassist Mike Goldman, also of the band the Miracals, was screaming along, even without a microphone. “The Safety Zone” got them a great response from fans that they’d probably just made that day, and the crowd even sang along to closing number “Nice Guys.” 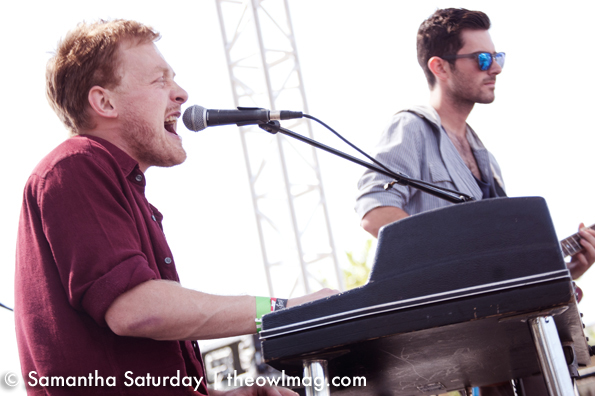 Chasing Kings
Around 3:45pm, we dipped into the Eagle Bar once again to grab some refreshments, and also catch a few songs by the Gay-Gays, the self-described All-Gay Male Go-Go’s Celebration! While not as raucous as the Mo-Odds, the Gay-Gays still managed to put on quite a spectacle in the tiny venue, with their frontman wrapping a towel around his head, beehive hairdo-style, just like the Go-Go‘s. These guys were a lot of fun, and hearing tunes like “Our Lips Are Sealed” was pretty cool. 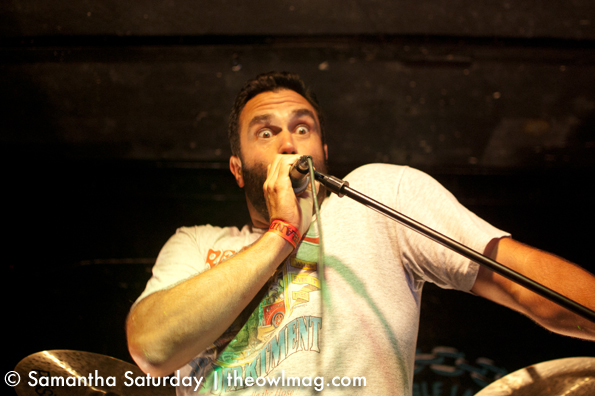 The Gay-Gays
Outside, Princeton took the Hoover Stage, opening with the mellow “Andre,” which featured xylophone-esque organ and chiming, gazy chords. They announced their second song, “Phase” calling it boring and sad, they were right: it was a short, self-indulgent instrumental track that caused some of the crowd to leave. It was a curious choice, especially considering that the crowd had to fight the hard sun behind Princeton’s back. Before playing a new song, “Toledo,” singer Jesse Kivel told the audience to “feel free to get your groove on.” The track’s driving drums and synthesized saxophone provided a good beat for just such an occasion. When someone yelled out the name of Kisses, Kivel’s other project, he replied with, “screw that band!” Kivel and his brother Matt provided more stage banter than most of the other acts before closing out with the tropical crescendo of “Florida.” 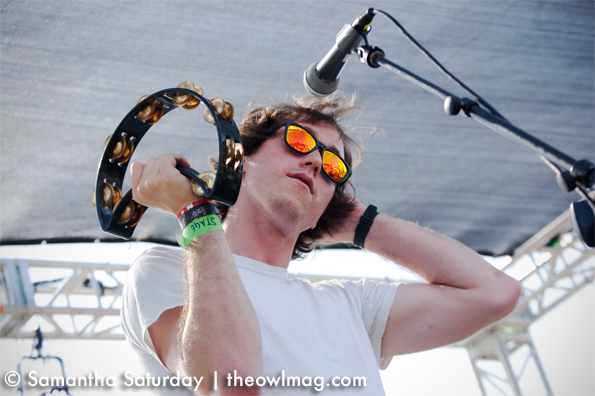 Princeton
Eastern Conference Champions brought their arena-ready hard rock back to the Silver Lake Jubilee after playing the inaugural Jubilee two years ago, where even then, they looked like seasoned vets. They should be huge stars; they’ve got the songs, and the hooks, and lead guitarist Melissa Dougherty is a rock star, through and through. “The Fire” really got the crowd grooving, and the fantastic “Bull in the Wild” was the Jubilee’s finest hard rock moment. They ended with “Attica,” during which drummer Greg Lyons played like a ferocious rock beast. 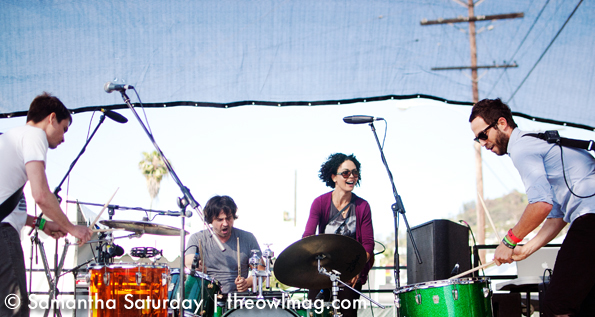 Eastern Conference Champions
Lake hit the Hoover Stage while the lowering sun was still being a challenge for those checking them out. “Within/Without” is a fine pop song in its recorded version Lake’s live performance fell a bit flat. They switched instruments a lot, and some of their songs had some nice thumping bass, and they were able to create some lite-funky, blue-eyed soul grooves, but we found them to be somewhat underwhelming as a whole. Inside a club might be a better setting for Lake’s mellow tunes. 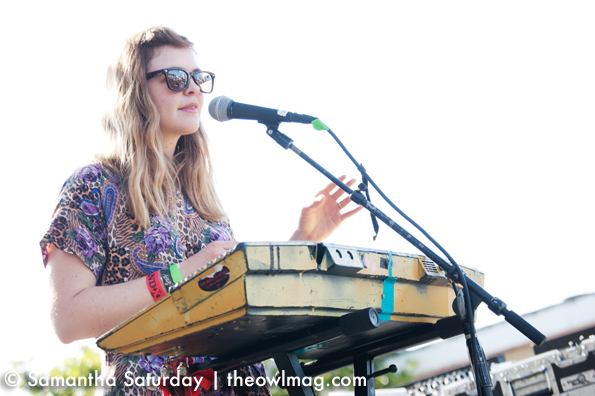 Lake
La Sera‘s set on the Sunset Stage was a good one. Singer Katy Goodman’s angelic voice provided an interesting dynamic when paired with her music’s raw punk energy. “Devils Hearts Grow Cold” had grungy riffs that attracted a crowd that would go on to bop along to the band’s classic proto-punk guitar leads. “Sleeptalking” was a gem with hints of punkabilly, and “Please Be My Third Eye” really got the crowd dancing. Goodman knows how to write great lovelorn anthems, and her band can really deliver them live. 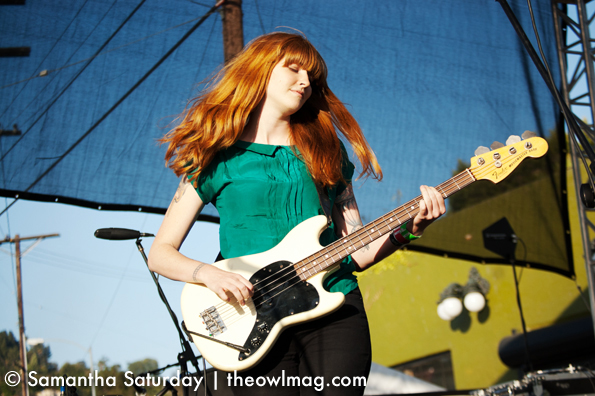 La Sera
We got to the Sunset Stage at 8pm, just in time to see the tail end of Maya Jupiter‘s energetic set, where she had been joined by her husband, Sunday Night’s headliner Aloe Blacc. By the time Jupiter’s set was over, the area in front of the stage was filled as far as the eye could see, and the crowd didn’t disperse between acts like they had earlier in the day. Aloe’s band hit the stage right at 8:30pm, laying into a tight groove as the man himself sauntered on. 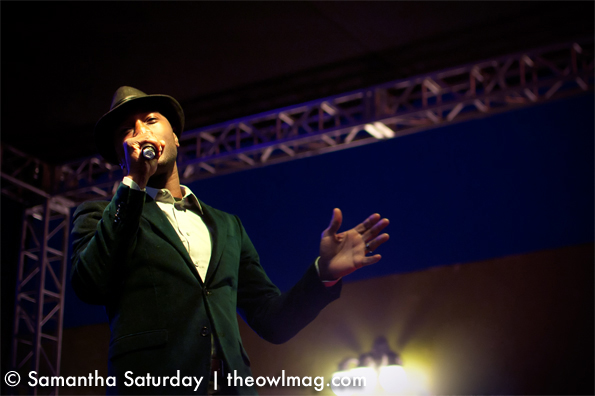 Aloe Blacc
Aloe has great stage presence and a great voice, and his band, the Grand Scheme was super-tight. Soulful jams like “Green Lights” and “Tonight Downtown” bounced along with an energy that called to mind what it must’ve been like to see a Stax Records gig in the ’70s. The dapper Mr. Blacc the Grand Scheme through quick gymnastic turns that included mid-song snippets of everything from “Rapper’s Delight” to Curtis Mayfield’s “Diamond in the Back,” and they kept the proverbial ship afloat at every turn. Aloe Blacc had the entire crowd getting’ down, and his positive energy helped provide a transcendent ending to a great weekend.

This was this Owl’s third time attending the Silver Lake Jubilee, and it’s always been a place to check out bands I’ve read about, and also to encounter surprising new favorites I’d never expected. This year, ticket prices went up from the suggested donation of $5 to $20 per day. It was a quadrupling in price, but $5 per day was severely underpriced anyway. This year they had a parking lot set up at an abandoned Circuit City, and a shuttle van that was constantly on the go between the Hoover entrance and the parking lot. Parking did cost $10, but it was probably a lot better for the residents of the Silver Lake.

In addition to bands and comics, there were a lot of food trucks and vendors, selling everything from t-shirts to handmade ear rings, decorated flasks to art prints. I’ve bought stuff in the past, but this year I just stuck to food, including delicious noms from Coolhaus, Greenz on Wheelz, and Dosatruck. There were also tacos, salads, and one vendor who grilled up an entire pig over the course of the day, which was definitely a sight to behold.

Pepsi’s presence was a bit intrusive, but it was mostly contained to their DJ booth, which was playing from a somewhat limited set of tracks. They did play “Push It” by Salt ‘n Peppa, though, and free soda was everywhere, so that was cool if you happened to accidentally walk in with, say, a mini bottle of Captain Morgan (if not, there was always $5 beers on tap at the Eagle, or $4 tecates at El Cid). Security didn’t check bags or pat us down when we entered, but t-shirted Jubilee volunteers, security staff, and cops on foot and electric scooter maintained a peaceful atmosphere.

One thing I admired about the Jubilee was their commitment to creating as little environmental waste as possible. Attendees were able to bring their own water bottles, which they could refill for free at a filtered water station. There were also waste stations positioned throughout the site, with Sustain LA volunteers always on hand to help you figure out what should go to compost, recycle, or landfill containers. The waste stations were continually emptied, ensuring there was never an overflow of garbage. it’s something the Jubilee has always done, but it’s especially refreshing in light of last year’s Sunset Junction debacle.

Check out even more badass photos of Silver Lake Jubilee here and check out our LIVE REVIEW of Day 1 here!