Ah, the sights, sounds, and occasional odd smells of the Silver Lake Jubilee. Now in its 3rd year, the festival is becoming a Southern California staple. In the past, it’s featured great bands, tasty food, awesome weather, and interesting people-watching. This year’s festival continued those traditions while still maintaining their commitment to environmental sustainability and creating zero waste. The festival is also a great way to discover new acts. Here’s a recap of some from Day 1: 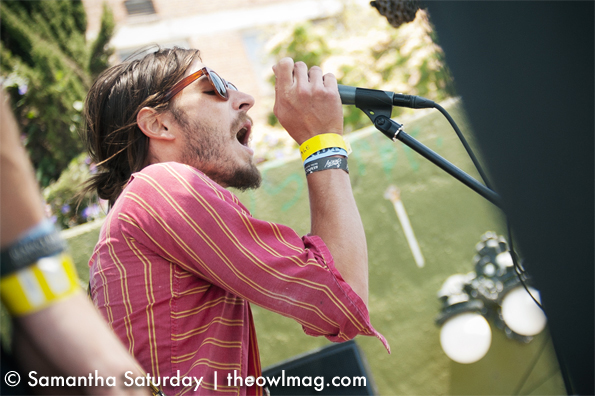 Wildcat, Wildcat!
LA’s Wildcat, Wildcat! opened it up. The guys were a good match for the day’s sunny-yet-cool weather. They have a very organic stage presence, employing many falsetto harmonies in their vocals. Their second song “Arrow,” reminded us of The Thrills with its multi-layered poppy instrumental melodies. “The Chief,” which will be on an upcoming vinyl release, had dreamy fairy tale organ lines, and a crescendo that had the guys onstage rockin’ out to their own sounds. They closed with “Martha,” which had more natural vocals and dance-funk verses that could have made the audience shuffle had they gone on later. 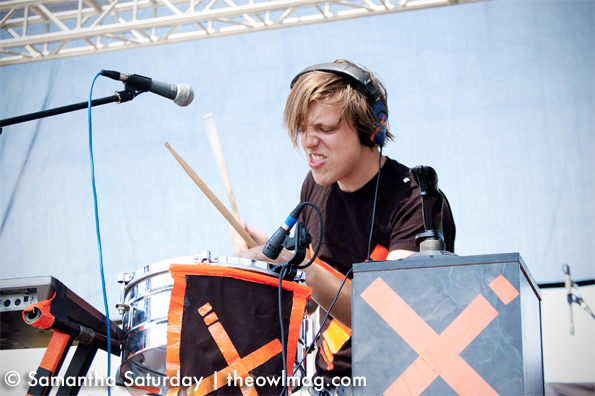 Robert DeLong
We caught electronic dance artist Robert DeLong on the Sunset Stage. Robert looks like he’s not a day over 15, but we do say, this kid is amazing. Decked out in all-black with orange X’s duct-taped onto everything, he was truly in command of the bevy of instruments and units he had onstage. DeLong is like a new millennium wizard of dance, sampling and looping himself on the fly and manipulating his sounds with everything from joysticks to a repurposed Wii-mote. At one point, he even jumped on the drum kit to accompany himself with a tribal backbeat that had the raver kids in the audience bopping along in a trance. “Did I leave my life to chance, or did I make you fuckin’ dance?” he asked, and yes, yes he did. 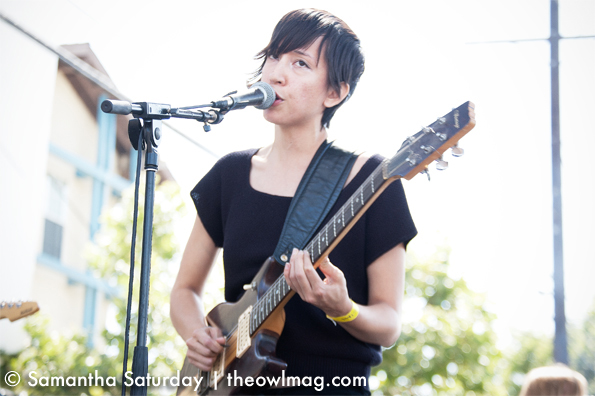 Dunes
We next caught Dunes on the other side of the fest at the Hoover Stage. Dunes is a band with a lot of varied influences in their DNA. At times their psych-pop had elements that were sludgey, stonery, dreamy, and punky, sometimes in the same song. Though listed as a trio, onstage they had four players. Mark and the other unnamed gent were pretty still onstage, while the ladies, Stephanie and Kate really got into it. Unfortunately, the left-side speakers of the Hoover Stage would occasionally cut out on them, a problem that would continue throughout the day. Dunes persevered, dropping in some funky rhythms and arpeggiated guitar lines, but in the end, we have to admit that their songs started to sound redundant after a while. 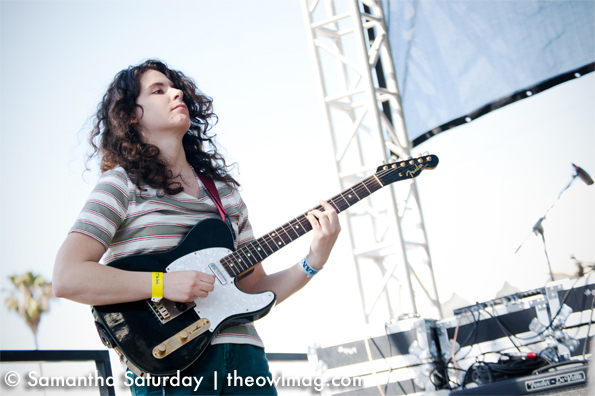 Catwalk
Catwalk was next up on the Sunset side. Their presentation of jangly garage-pop had some sloppy moments, but they were still a likeable bunch. Lead singer Nick Hessler seemed content to reside behind a pair of mirrored shades, while guitarist Arin sported a gimpy knee and a mischievous grin on her face, like she was in on a secret we weren’t privy to. “(Please) Don’t Break Me” was a bouncy 3-chord highlight of their appearance. Hessler’s voice seemed to fall a bit flat towards the end of their set, but they closed out soon after with some spacey surf vibes. 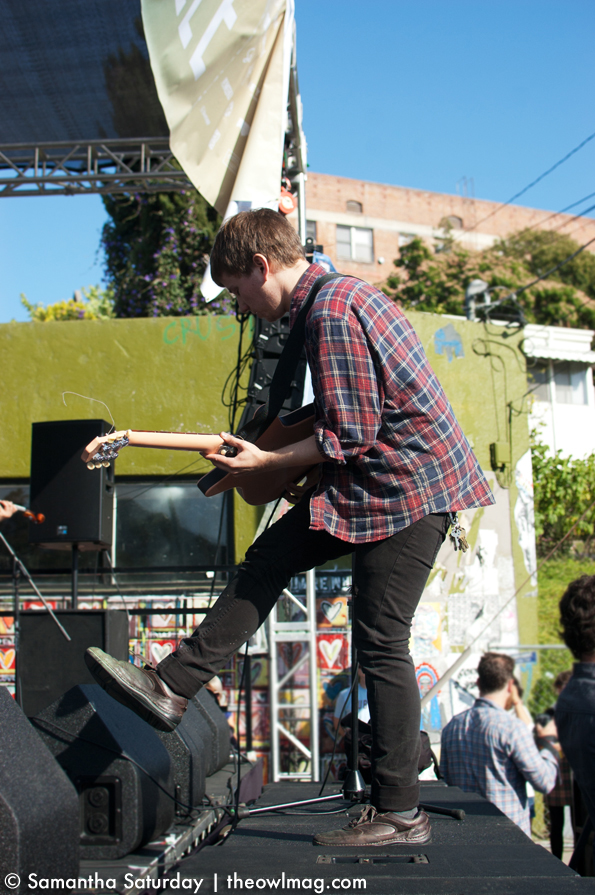 Moses Campbell
Moses Campbell took the Sunset Stage at 4:45 pm. Moses Campbell is not a man, Moses Campbell is a band; per their website, they are a family making their patriarch frontman Sean Solomon, whose vocals reminiscent of Clap Your Hands Say Yeah, venturing into Jack White territory when he hit the loud high notes. Jams like “Ceiling” brought a manic alt-rock energy that really got the crowd going, prompting the first and only mosh pit we saw all day. Their songs touched on everything from ’90s slacker rock, to Joe Jackson-esque dance punk, with Pauline Lay adding distorted violin like it was spiky lead guitar. At the end, Solomon pulled out an admittedly old trick that still won me over, jumping into the crowd during a song, guitar, mic, and all, with the kids in the audience knowing every word. Moses Campbell‘s young but well-practiced; the band’s been together since they were in high school four years ago. Their great songcraft and dynamic presence made them a definite fest highlight. 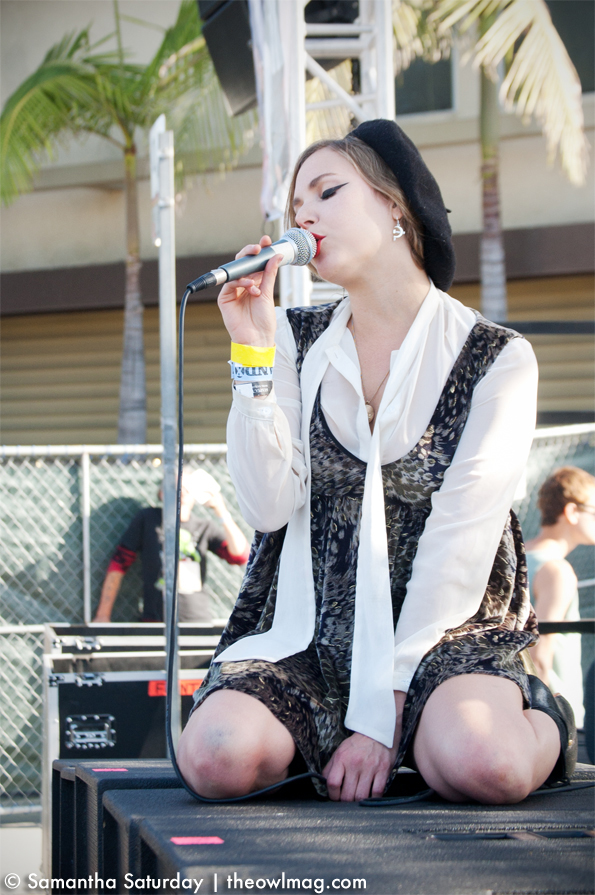 JJAMZ
Back at the Hoover side, we caught JJAMZ, an LA supergroup featuring members of Phantom Planet, Rilo Kiley, and Maroon 5. Their collective experience definitely showed as their set just seemed to sound tighter and more precise than some of the younger acts. Heck, they even had nicer clothes on. Singer Z Berg, also of the Like, commanded the stage like a pro, with a voice that occasionally cracked, but in a good way. She kept it mysterious at times, pouting like a model during songs that sounded like ’60s girl group pop. Despite their well-crafted pop hooks, the crowd seemed more appreciative than excited, indicating that they might’ve sounded a little too professional. 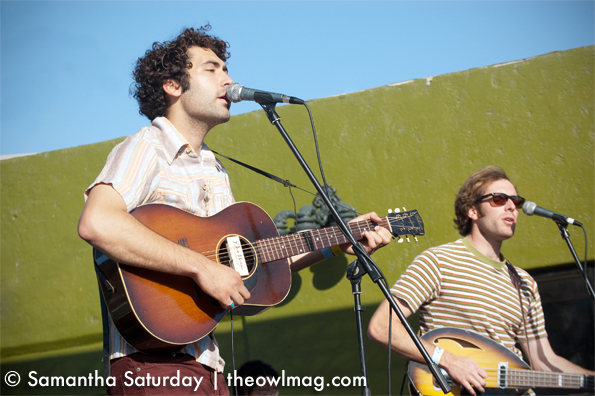 Allah-Las
The Allah-Las are a band we’ve heard a lot about, but never took the time to check out. Live, their loungey surf rock sounded to me like a more relaxed Black Lips, even down to the vocalists having similar voices. Their jams sound nice enough on record, but it got to the point during their set that the music just started to sound like incidental background tracks. They’d make for fine listening on the way to some surf and sand, but they’re a little too laid back live. The crowd seemed to echo similar feelings, behaving like they were waiting for something that never came. 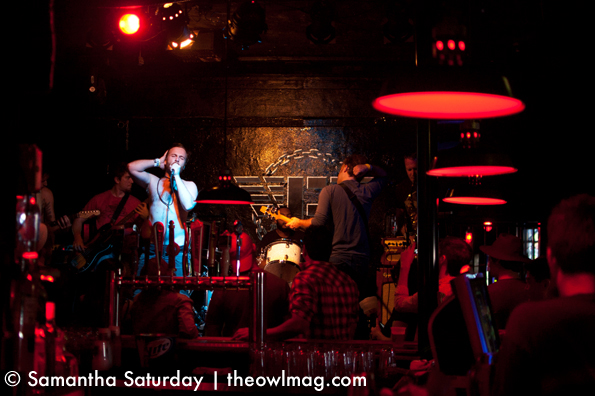 The Mo-Odds
One benefit of the Jubilee’s new location on Santa Monica Blvd. was that it encompassed the area where a tiny, tiny gay bar called The Eagle sits. Around 6:30pm, we made it inside to catch a blistering set by The Mo-Odds. When we entered, they were in the middle of a cover of “Good Golly, Miss Molly,” during which the singer proved that no shoes and no shirt were not a problem. The stage at The Eagle bar is literally just big enough to stand on, so the singer had to vibrate in place or climb on the drumset to expel all of his energy. Eventually the confines were too much, and he literally stepped from the stage to the bar, without touching the ground.

By that time, he’d stripped down to his skivvies, which made the way he crawled along the bar on his stomach that much more memorable. During smelly, grimy, saxophone-accented boogie rockers like “Pill Box,” the guys were striking well-earned rock god poses. By the end of their lively set, an audience member had jumped onstage, everyone in the band had their shirts off; there’d even been beer-soaked intraband wrestling! The whole thing felt chaotic, dirty, dangerous, nasty, alive; another highlight. 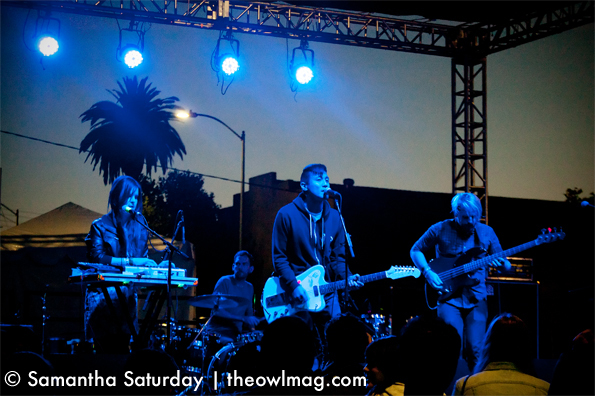 Letting Up Despite Great Faults
Around 7:30pm, the California sun finally started to retire for the night, so Letting Up Despite Great Faults had a prime spot when they hit the Hoover Stage around 8:10 pm. They were the first act of the day able to take advantage of the stage’s lighting, and it complimented their dreamy shoegaze songs well. During tracks like the driving “Teenage Heart,” from their latest Paper Crush EP, bassist Kent Zambrana really laid down a groove, causing both he and the crowd to dance along. Frontman Mike Lee’s songs of love and desire really fit in nicely with the setting sun. Though known more for shoegaze or dream pop, some tracks brought a real bouncing energy that the crowd seemed to love. Drummer Daniel Schmidt kept the beat with deft cymbal work, and keyboardist Annah Fisette added some sweetly layered melodies. “In Steps” went over well with its electro breakdown; their ability to bring everything from dreamy pop to electro freak jams left me impressed. 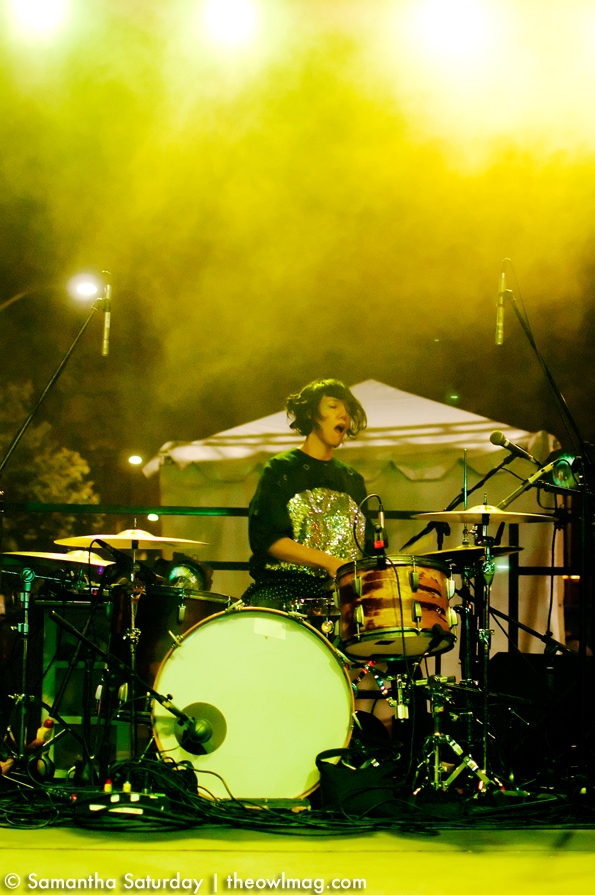 Autolux
We ended the first night of the Jubilee still at the Hoover Stage, with Autolux. Right around 9:30pm, they started with a bang, literally. Drummer Carla Azar stepped up first, pounding her snare drum to kick off their first song, “Subzero Fun,” for a packed and waiting audience. The LA natives played songs from throughout their 12 year career, including tracks from their last LP, 2010’s Transit, Transit. The hard, heavy shoegaze of “Plantlife,” from their debut, Future Perfect found lead vocalist/bassist Eugene Goreshter really holding down the bottom end.

During “Audience No. 2,” it was hard to tell whether more smoke was coming from the machines onstage, or the audience itself. “Highchair” featured percussion and some melodies reminiscent of Radiohead‘s “There, There.” Since they were the last act on their side of the festival, they got to play an encore, the shoegazey “Headless Sky.”