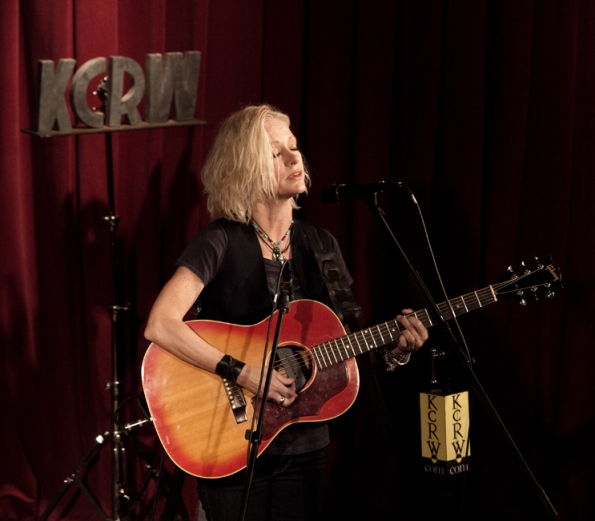 Opportunities to see great musicians play intimate acoustic sets are rare, so I'm definitely counting my blessings that I was able to watch Grammy winner (Best New Artist, 2001) Shelby Lynne perform songs from her newest album, Revelation Road on Tuesday night. In a crowded little studio, Lynne played her guitar and sang her heart out to about fifty people. The event was hosted by KCRW and included an interview midway through the set by DJ Anne Litt.

Every song on Revelation Road is a deeply personal confession; some are heartbreaking, some uplifting and inspirational. Many songs focus on family memories and Lynne's understanding of the anguish that may have led to the tragic loss of her parents. During the inte

rview, Lynne revealed that her heart is what told her that it was time that she could talk about how much she loves her daddy and that she feels grateful for the amount of honesty that she now has in her heart.

Lynne recorded 10 albums on various labels, from 1989-2008, until she decided to take the reins. Since then, she has independently released three albums on Everso, her own label. When asked why she decided to take on the entire process independently, she said, “I want to make a record that is really good; I don’t want to make a hit.” Determined to do so, Lynne wrote, sang, and produced every song and played every instrument on Revelation Road.

As a collection of songs, Revelation Road is a beautiful album of self-discovery and insight. Stripped of backup instruments and any studio elements, hearing the album live was a gift of unmistakable talent and soul. Check out the performance, which will air on KCRW during Morning Becomes Eclectic on February 6th.