After a night that for most, included lots of alcohol consumption and little sleep, people began wandering into the festival grounds. Those that were awake early enough to catch the 12 o’clock show at the main stage were met with the treat of hearing Seattle orchestral-pop band Hey Marseilles who we’ve featured here. Lead singer Matt Bishop offered a sentiment that he hoped their set would comfort those with hangovers. Their high-energy performance was met with a high energy response; the crowd clapping along to their hit “Rio.” 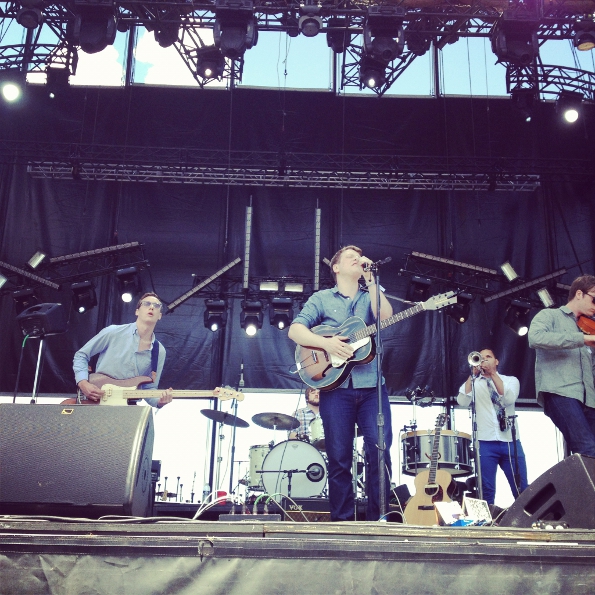 Next came an upbeat performance by Dale Earnhardt Jr. Jr. Although the Detroit band wasn’t on this Owl’s must-see list, they did a good job of kicking up the energy a notch with catchy songs like “Nothing But Our Love” and “Simple Girl.”

We got to the Bigfoot Stage just in time to see the end of indie pop trio Hospitality. Their airy sound worked well with the middle of the day, hotter than hell time frame. 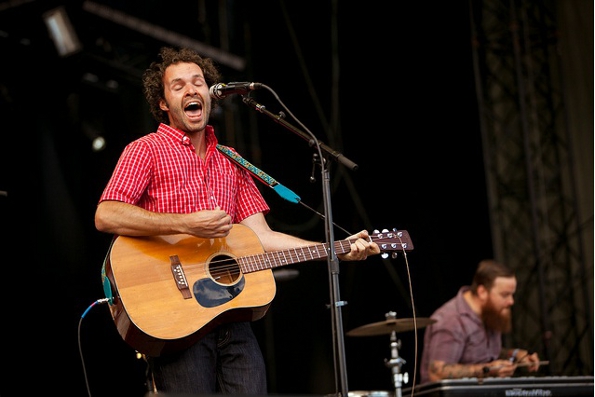 Blind Pilot took the stage next, putting on a relaxing show. Many people could be seen napping in the sun. A very different scene than the previous could be found at War on Drugs, which ironically hosted the most obviously cracked out dirty hippies that we had seen at the festival thus far. Despite a group of chanting enthusiasts, the performance, although not bad, was not spectacular. 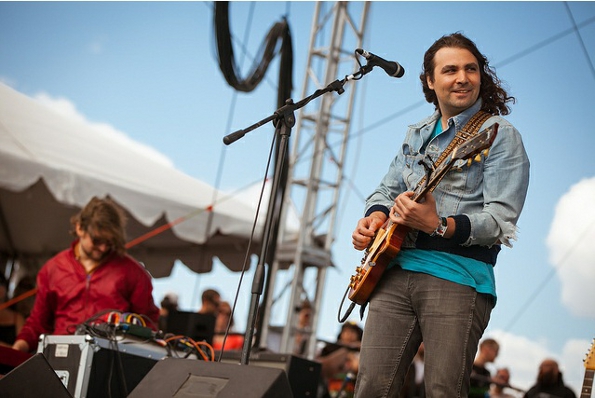 Good thing for us, Deer Tick came onto the Bigfoot Stage and not only kicked some major ass, but also became this Owl’s new obsession. The band drank beer from a cooler on stage and sucked on cigarettes. They began the set by saying “Let’s get our obligation over with so we can come party with you!” The high-energy performance included guitarist Ian O’Neil planting a kiss on lead singer John McCauley, McCauley repeatedly kicking his leg in the air, and ended appropriately with a cover of “Fight for Your Right to Party.” 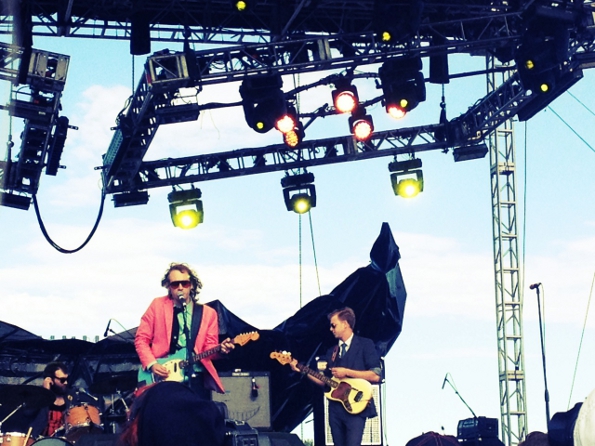 After making a quick stop at The Head and The Heart, we made our way over to the Yeti Stage to check out newly popular We Are Augustines. This trio was so extremely happy to be there, and their energy was tangible. They jammed out, asked for crowd participation, and ended the set by throwing a beach ball into the audience. 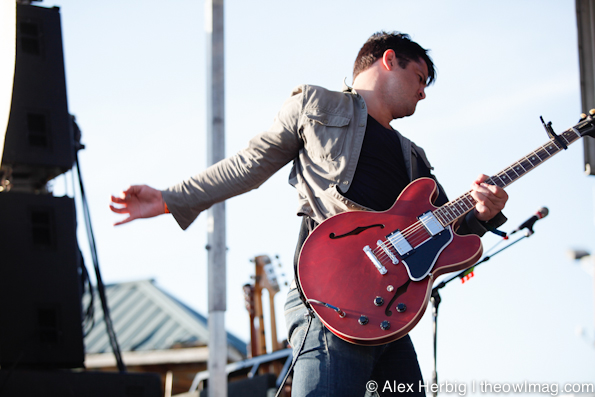 Just as the sun was setting, Beirut took the mainstage, putting on an awesome performance. The mixture of horns, Zack Condon’s personality, and a drummer with a goofy smile, created a Sasquatch bonding-inducing show. The show also included an accordion mishap just before “Nantes” which Perrin Cloutier fixed by thinking on his feet and playing the melody on the piano. Beirut‘s entrancing songs were the perfect soundtrack to the sun going down in The Gorge. 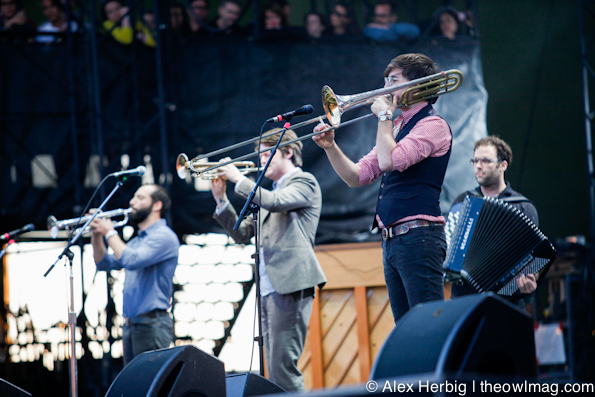 In an attempt to see as many of the great bands that were overlapping each other as we could, we ran up the hill to catch Little Dragon. Thank god we did, because it was something we would have been bummed to miss. The electronic band put on a show with awesome tunes, crazy lights, and high energy. 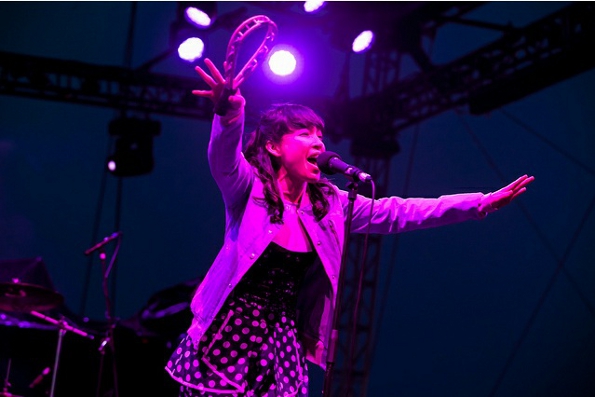 But the headlining performance by Bon Iver won the best show of the day award; no actually, it won the best show ever award. Midway through the set, this Owl turned to her friend and said, “This is the best thing I have ever seen.” Justin Vernon started with “Perth,” the opener on his self-titled album, before moving into “Minnesota, WI.” 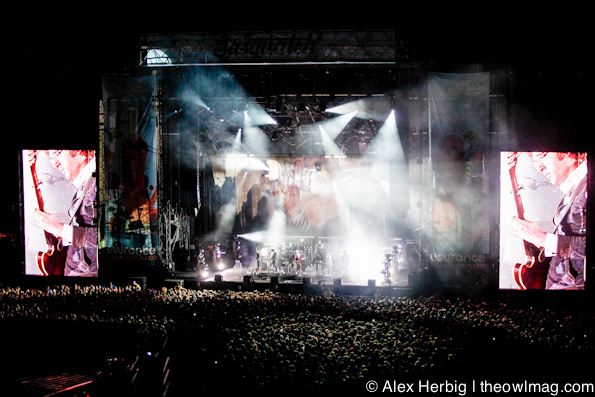 Vernon, who was on a smaller stage just two years ago at Sasquatch, seemed extremely grateful to be at The Gorge, continually thanking the crowd. The encore began with “Flume” and rolled into “The Wolves (Act I and II)” with the audience of thousands singing the lyrics “what might have been lost” before breaking into a scream-fest. The prolonged ending of the song left fans waiting and begging for what they hoped was coming next; “For Emma” ended the perfect show on a perfect, dreamy note.

Check out even more badass photos here! And check out our LIVE REVIEW of Saturday’s Sasquatch Music Festival 2012 here.